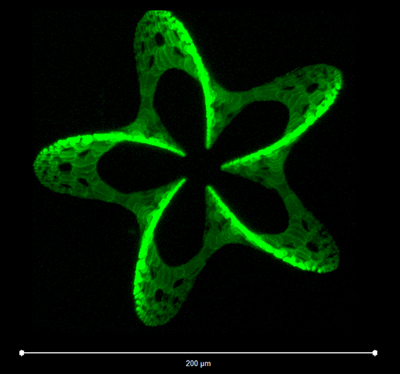 There are many ways to create three-dimensional objects on a micrometer scale. But how can the chemical properties of a material be tuned with micrometer precision? Scientists at the Vienna University of Technology (TUV) have developed a method of attaching molecules at exactly the right place.

When biological tissue is grown, this method can allow the positioning of chemical signals, telling living cells where to attach themselves. The new technique also holds promise for sensor technology: a tiny three dimensional “lab on a chip” could be created, in which accurately positioned molecules react with substances from the surrounding environment.

Materials Science and Chemistry “3D-photografting” is what the TUV scientists are calling their new method. Two research teams from the Vienna University of Technology have collaborated closely to develop it – Professor Jürgen Stampfl’s materials science team and Professor Robert Liska’s research group for macromolecular chemistry.

Both research groups have already attracted considerable attention in the past, for the development of new types of 3D-printers. However, for the applications on which the scientists are now working, conventional 3D-printing would not have sufficed.

Aleksandr Ovsianikov comments, “Putting together a material from tiny building blocks with different chemical properties would be extremely complicated. That is why we start from a three-dimensional scaffold and then attach the desired molecules at exactly the right positions.”

The scientists start with a hydrogel, which is a material made of macromolecules, arranged in a loose meshwork. Between these molecules, large pores remain, through which other molecules or even cells can migrate.  Specially selected molecules are introduced into the hydrogel meshwork, then certain points are irradiated by the laser beam.

At the positions where the focused laser beam is most intense, a photochemically labile bond is broken. By that means, highly reactive intermediates are created which at that precise point rapidly attach to the hydrogel. The precision depends on the laser’s lens system, at the Vienna University of Technology a resolution of 4 µm has been achieved. Ovsianikov adds, “Much like an artist, placing colors at certain points of the canvas, we can place molecules in the hydrogel – but in three dimensions and with high precision.” 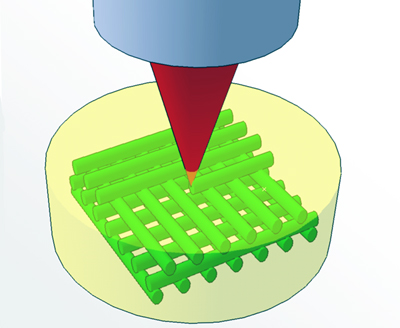 3D Photo-grafting technique: A laser shines into the hydrogel (yellow).

This method can also be used to artificially grow biological tissue. Like a climbing plant clinging to a rack, cells need a “scaffold” to which they can attach. In a natural tissue, the extracellular matrix does the job by using specific amino acid sequences to signal to the cells, where they are supposed to grow.

In the lab, scientists are trying to use similar chemical signals. In various experiments, cell attachment could be guided on two dimensional surfaces, but in order to grow larger tissues with a specific inner structure (such as capillaries), a truly three-dimensional technique is required.

Depending on the application, different molecules can be used. 3D photografting is not only useful for bio-engineering but also for other fields, such as photovoltaics or sensor technology. In a very small space, molecules can be positioned which attach to specific chemical substances and allow their detection. Thus microscopic three-dimensional “lab on a chip” becomes possible, the researchers say.

The latest research results, which made the cover of a recent journal can be accessed here: Advanced Functional Materials. Captions: Cap1 3D pattern, produced by photografting (180 µm wide). Fluorescent molecules are attached to the hydrogel, resulting in a microscopic 3D pattern. Cap 2 3D Photografting: A laser shines into the hydrogel (yellow), attaching molecules to it at specific points in space (green)