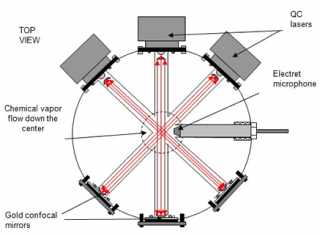 Photoacoustic techniques are currently a focus of interest for researchers in several fields, as shown by the attention paid to the topic in the keynote address at SPIE Photonics Europe which discussed its use in biomedical imaging.

A team at the US Army Research Laboratory (ARL) has now developed a laser photoacoustic spectroscopy (LPAS) platform intended for the detection of dangerous gaseous species, such as nerve agents and toxins, that could ultimately be robust enough for military deployment. The work was reported in Optics Letters.

LPAS relies on the characteristic acoustic waves generated by certain chemical species when they absorb laser light of particular wavelengths via molecular transitions. The absorbed energy brings about local heating, which can in turn bring about a pressure wave and a faint acoustic signal

Traditionally photoacoustic analysis examines only one absorption parameter at a time, effectively limiting its scope to spotting one chemical a time too, and making LPAS poorly suited as a viable gas detection technique. Using more than one wavelength could solve this problem, but although multi-wavelength variants of photoacoustic tomography have been investigated for bioimaging, a similar approach for spectroscopic characterization has not been fully explored, according to ARL.

Some tones are louder than others
The platform designed by the team employs a multi-wavelength LPAS regime. Three laser beams, each modulated to a different frequency, were propagated through the sample cell, generating not just a simple photoacoustic response but an absorption spectra, and yielding added information for identification and detection.

Kristan Gurton of ARL explained the advantage of such a multi-wavelength architecture. "Each laser in the system will produce a single tone, and different agents will affect the relative 'loudness' of each tone. So for one gas, some tones will be louder than others, and it is these differences that allow for species identification."

The team employed three continuous-wave mid-IR laser sources: two CO2 lasers operating at 9.27 and 10.35 microns, and a quantum cascade (QC) source operating at 8.72 microns. All three were attenuated to 50 mW.

Crucially, each was modulated at a different acoustic frequency - 1900 Hz, 1700 Hz and 1300 Hz respectively - in order to separate the acoustic response for the different wavelengths. Multiple amplifiers tuned to a specific frequency could then extract the signals from the environment.

Nerve agents
For their proof-of-concept study, the team applied the technique to six known gaseous nerve agents, comparing the LPAS spectra to a database of absorption information to identify the gas present in a qualitative manner. After initial trials, ARL anticipates that a future quantitative method based on the technique should be capable of detecting gas concentrations at "parts per billion or even parts per trillion levels."

Gurton highlighted the increasing availability of suitable QC sources as a significant factor in the development of such a quantitative field-ready instrument.

"A QC laser array with at least six well-chosen mid-IR wavelengths would need to be available," he commented. "There are now groups of researchers producing QC laser arrays that will operate with sufficient power, and will house as many as ten or more lasers at different frequencies in the spectroscopically rich region of the mid-IR. Once such laser arrays are available, the method could be tailored for a variety of detection scenarios. A photoacoustic cell is surprisingly simple and inexpensive to produce, with all of the cost and size driven primarily by the packaging of the quantum cascade laser array."