Maturing technologies and partnerships between solar and construction companies will prompt 4.6GW of installations by 2017.

A new market report from the analyst company Pike Research – now part of the highly respected Navigant Consulting group – says that the niche area of building-integrated photovoltaics (BIPV) is about to burst into the mainstream.

Between now and 2017, say authors Philip Drachman and Kerry-Ann Adamson, around 4.6 GW of BIPV will be installed around the world. Although that would represent only a small part of the wider solar industry (nearly 30 GW of PV installations were connected to the grid last year), it is likely to be one of the fastest-growing. And, unlike the vast majority of current installations, it should provide an opportunity for PV companies to actually make some money.

BIPV has long been talked-up as an emerging market, but the Pike analysts say that it really is now starting to come of age:

“Until recently, aesthetic and performance concerns greatly limited the ability of architects to use BIPV in their building designs, but this has been changing,” they write.

What this means is that BIPV features will be able to expand outside of the very limited list of current options, which are largely restricted to rooftops and spandrels – areas between windows in steel-framed buildings.

As a result, what is currently a market worth only around $600 million annually will more than double in two years and continue to expand rapidly, reaching an estimated $2.5 billion by 2017 according to Pike’s base-case scenario, and perhaps as high as $3.7 billion under a more aggressive forecast. 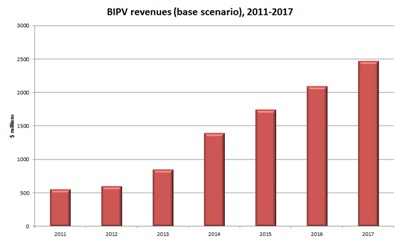 Ramping up: global market for BIPV

PV-construction collaboration
Two years ago, an earlier Pike report had forecast a similar set of figures for 2016, suggesting that things haven’t quite taken off as quickly as originally expected. However, with a number of partnerships between PV specialists and construction companies now emerging, alongside technological progress in flexible PV modules and the desperate need for many PV firms and, to a lesser extent, construction companies, to make some money, there appears to be more impetus and collaboration.

“The emerging BIPV market, which straddles the building industry and the solar power industry, offers a new way to develop revenue streams for both parties,” says Adamson, also Pike’s research director. “Solar suppliers have begun to partner with building and construction companies, as well as designers and architects, and have gained access to completely new markets. At the same time, building companies have started to recognize new opportunities in green buildings and in retrofitting existing homes and commercial facilities.”

The Pike report identifies CIGS specialist Dow Solar, Iowa-based PowerFilm and California’s Pythagoras Solar (covered by optics.org earlier this year) as three BIPV companies to watch out for this year, highlighting the firms’ various partnerships with textile and construction companies to open up new distribution channels.

But the real market growth is expected to begin next year and accelerate into 2014, as several long-term projects reach maturity.

The report highlights a partnership between window glass giant Pilkington and Dyesol, the Australian dye-sensitized cell (DSC) maker, as one such example. Although the companies’ joint-venture DyeTec Solar is not yet manufacturing modules and still working to solve what Pike calls “efficiency issues”, initial production of windows featuring semi-transparent BIPV glass is expected by late 2013.

“The company estimates that 20% of production will be converted to DSC solar glass, which would amount to over 840 million square meters per year,” notes Pike. 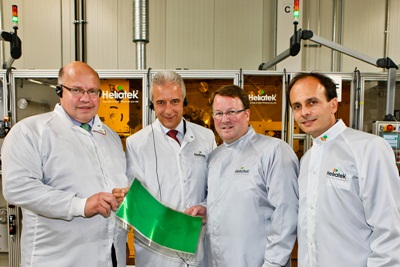 According to Pike, Heliatek is working with Reckli, a manufacturer of elastic molds used in concrete building façla;ades, and plans to introduce OPV panels to the market for this application in 2014. “Given their minimal weight, the panels may be good candidates for use with lightweight industrial roofs,” the Pike report says.

Although OPV is not yet a commercial reality, largely because of difficulties in scaling up production to large volumes while maintaining the conversion efficiency levels of around 10% that have now been demonstrated by three separate groups in the laboratory (including Heliatek), the German company has become the de facto commercial leader in the emerging sector since the demise of Konarka Technologies earlier this summer.

Scheduled to begin shipping initial OPV products by the end of this year, Heliatek is also thought to have made more progress than any other research team in terms of transferring the efficiency levels seen in the laboratory to real-world production. The company is currently looking to raise €60 million to construct a true volume production facility.

Dye-coated steel
Another long-term effort highlighted for its potential by the Pike analysts is that of Tata Steel. At its UK laboratories, the India-headquartered company is working on DSC-coated steel roofing materials (also with Dyesol) and has produced the world’s largest such module, at six meters long and 30 cm wide.

“Developing the ability to print the PV coating directly onto steel roof cladding will enable the modules to be produced in large volumes cost-effectively,” states the report. “These products will be much lighter than existing rigid silicon PV panels, which will facilitate their integration into existing structures.”

Underpinning the investment in all of those technological developments and Pike’s expectations of rapid market growth is legislation. For example the European Union’s target to reduce carbon dioxide emissions includes a ruling that all new public buildings must be carbon-neutral by 2018, something that is set to encompass all new builds after 2020.

Pike also notes that many other countries are developing their own regulations and beginning to offer incentives for BIPV implementation. It identifies eastern Europe, Asia-Pacific, Latin America and South Africa as key BIPV markets that are likely to emerge through the next five years.