Achieving widespread grid parity with solar electricity may set up a titanic clash between the two industry sectors. 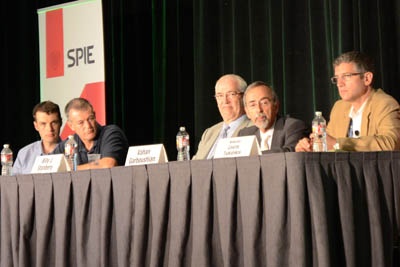 The falling cost of photovoltaic power will set up a “collision of titanic proportions” between energy utilities and the construction industry as grid parity is reached on a widespread basis.

That’s according to Billy Stanbery, founder and chief scientific officer of thin-film solar company HelioVolt, who made the comments during a panel session on the commercialization of novel photovoltaics technologies at SPIE’s Optics + Photonics event in San Diego this week.

Stanbery, who founded the Texan manufacturer of copper indium gallium diselenide (CIGS) cells and PV modules eleven years ago, is expecting a seismic shift in the way that electricity is generated, as the falling price of solar power prompts more consumers to adopt the technology.

If he’s correct, it will likely result in a far greater proportion of electricity being generated in small quantities and at a local level, typically via domestic rooftops as photovoltaics becomes an intrinsic part of the construction process. And it also suggests that construction companies – not to mention customers - will effectively be in competition with the utilities as energy providers.

“This will pit the construction materials industry against utility companies,” Stanbery said, adding that he expected the shift to take place over the next decade as the price of solar electricity becomes increasingly competitive with that from conventional sources.

R&D focus
While the cost of silicon-based solar modules has dropped precipitously over the past two years, Stanbery’s company HelioVolt is taking a different approach with its proprietary CIGS manufacturing platform.

Several thin-film CIGS firms have been forced out of business or into major restructuring over the past year in a tough market that has seen both investor cash and patience running out. But HelioVolt has so far bucked that trend and managed to close a series C funding round worth $85 million in September 2011.

The company has invested $185 million in a pilot manufacturing line, and is also spending heavily on research and development efforts to improve module efficiencies to 16% by 2014 and make the technology more cost-competitive. Thus far, champion efficiencies of 13.7% have been achieved.

In a separate plenary talk at the San Diego event, Stanbery outlined some of the ongoing development work at HelioVolt, noting that the company’s novel approach had improved compositional control in the thin films, with consistent module efficiency performance at around 13.7% and high yields.

Thinner absorber layers, rapid isothermal and optical processing steps and light trapping techniques – Stanbery said that close to 100% of the solar spectrum is trapped by HeiloVolt’s material, giving its panels a rich, black appearance - are also being worked on as the company strives to improve performance and reduce the cost-per-watt of the technology. 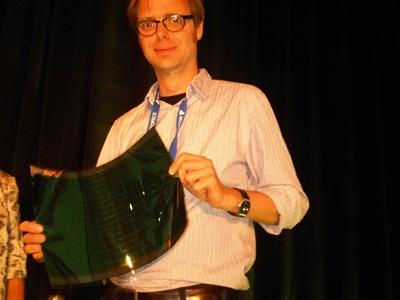 They acknowledged the problems presented by the rapid fall in the price of silicon PV modules over the past two years, though – not surprisingly – they all see a future for a broad range of PV materials and systems to suit different types of installations.

Amonix’s CPV systems are suited to large utility-scale applications, for example, with the company having recently completed a 30 MW project at Alamosa in Colorado. Despite being one of the clear leaders in the CPV sub-sector, Amonix has not been immune to economic realities and recently took the decision to shut down its manufacturing facility near Las Vegas in Nevada.

Amonix founder Vahan Garboushian nonetheless reflected in the Optics + Photonics panel session that now was as good a time as any to be involved in new types of PV technologies – provided that they can be made cost-competitive. “Everything boils down to cost,” he said. “Money in; electricity out.”

Stanbery agreed that prospects for new technologies were still “quite good”, provided that levels of spending on research could be maintained, but noted that in some instances the level of financial investments made has created a mismatch between expectations and reality.

NREL’s Garry Rumbles, also part of the panel discussion and a strong advocate for the potential of organic PV (OPV), reflected on the recent bankruptcy of OPV pioneer Konarka Technologies as a worrying sign, but remains optimistic about the technology and in particular the recent technological advances that have seen several groups push OPV conversion efficiencies above 10%.

He was also keen to stress the need to find an alternative to indium tin oxide (ITO) as the electrode material of choice for the emerging industry, calling it the “Achilles’ heel” of OPV and a major hindrance to its widespread deployment as things stand.

Highlighting that solar power is only really going to prove useful in mitigating carbon dioxide emissions if it can be deployed at a much larger scale than is possible today, Rumbles noted: “If we don’t meet the terawatt [power] challenge then all of this is a waste of time.”