Government spending slowdown and US political gridlock prompt the photonics firm to streamline its operations. 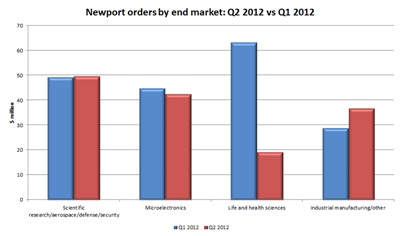 Photonics instrumentation and laser vendor Newport has begun making cost-cuts to its operations as order levels are hit by a slowdown in government spending on research.

Reporting a mixed picture of market trends impacting it in the second quarter of fiscal 2012, Newport CEO Robert Phillippy said that the current lull was affecting research spending in the key areas of aerospace and defense, together with life and health sciences.

The company posted sales of $153.7 million in the quarter, up year-on-year thanks to the multitude of acquisitions made by Newport over the past twelve months, but down 2.2% from the opening quarter of the year and slightly below expectations.

Uncertainty in the key US market is particularly acute in the aerospace and defense sector, where major cuts to the Department of Defense budgets are possible at the end of the current calendar year – depending on political developments.

'Political gridlock'
“Given this scenario and the current political gridlock, 2012 is shaping up to be a difficult environment for government funding in the US,” Phillippy told investors. “The scenario outside the US is mixed, but overall, these factors have made our outlook for the rest of the year a bit more cautious.”

One exception to the slowdown is Germany, where government support for technology development remains robust, and photonics has been prioritized. But with the wider picture in mind, Newport has already kicked off cost-reduction measures that are eventually expected to improve profitability by delivering annual savings of approximately $15 million.

The streamlining will largely relate to the ongoing integration of recent acquisitions, in particular of Ophir Optronics. Newport’s Spectra-Physics laser division will also make cutbacks, with CFO Chuck Cargile observing:

“We believe that the current funding uncertainty has caused customers to delay purchases of higher-priced products, such as lasers, more than purchases of our photonics components products.”

Cargile described customer behavior as “unusually cautious”, and added that the cost-cutting measures could include temporary shutdowns of certain company facilities – though he stressed that no permanent shutdowns were planned.

Life and health sciences: mixed picture
Overall, Newport’s orders dropped more than 20% from the first quarter of 2012, with the life and health sciences end market showing a particularly sharp decline. However, this is partly a result of the very large order for ultrafast lasers that the company received in the first quarter from its High Q Laser division, and which will be shipped over the course of the next year or so.

While research-driven orders for the bioinstrumentation sector look weak at the moment because of the government spending hiatus, CEO Phillippy believes that that the clinical side of the life sciences market still looks strong.

“We expect clinical applications in the life and health sciences market to be a significant growth engine for us in 2013 and beyond as the application space expands for ultrafast lasers in surgical procedures,” he told investors.

But the weakened demand overall means that Newport has adopted a less optimistic view of the rest of the year, and now expects total sales to either be flat or decline slightly in the current quarter. Phillippy concluded: 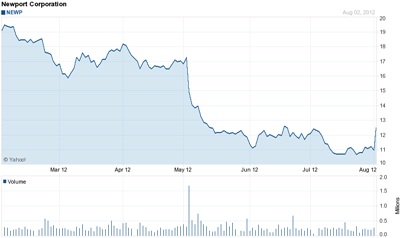 “Our outlook for the remainder of 2012 is more cautious than it was earlier in the year due to the general weakness in economic conditions and, specifically, uncertainty related to government funding.”

He insisted that the cost-cutting measures would put the company in a stronger position to benefit from a return to more normal government spending levels and as other markets gather strength – pointing out that in previous downturns Newport has been able to capture market share, and that it intends to do the same in the current lull.

• Investors responded positively to Newport's efforts to protect margins, with the company's stock rising by more than 10% to around $12.50 in early trading on August 2, regaining some of the ground lost over the past quarter.