LED sales for biomedicine to boom through 2018 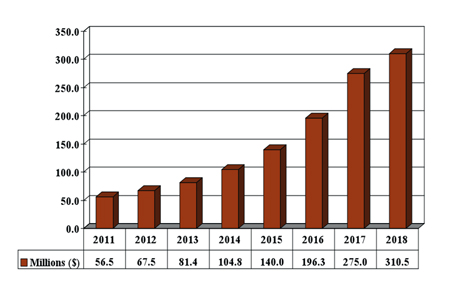 The Asia Pacific regional market for LEDs used in medical and biophotonic devices is forecast to increase in value by a factor of seven during the 2011 to 2018 timeframe.

The forecast comes from market analyst ElectroniCast Consultants, Upper Lake, CA, USA, which has conducted a study of the global consumption of packaged LEDs used in these applications.

The global consumption value of LEDs in selected medical and biophotonic devices in 2011 totalled $56.5 million. The consumption value is forecast to increase at an average annual growth rate of 27.6 per cent to $310.5 million by 2018, with strong quantity growth partially offset, by a decline of average prices – which is a common feature of LED market prospects whatever the application area.

Electronicast commented that its market forecast covers LED-based devices that transfer energy via light (such as for therapies or surgery), as well as applications that excite matter via light and transfer information back to the operator, such as diagnostic systems.

According to the report, Sensing/Detection and Analytical/Monitoring applications account for more than 50% of the worldwide consumption value of packaged LEDs in the selected and medical and biophotonic devices in 2012. By 2018, the relative market share of LEDs used in the same application category will decrease substantially as other end-user applications increase at a faster pace.

The American region currently commands over 40 per cent share of worldwide consumption of LEDs in medical/biophotonics (devices/equipment); however the region’s market share is set to decrease during the forecast period as the other regions increase at a faster pace.

In contrast, the Europe, Middle East and Africa region will grow at 27 per cent per year. The Asia Pacific region is forecast to increase in value by a multiple of seven-times during the 2011 to 2018 timeframe, with an annual increase of 32 per cent.