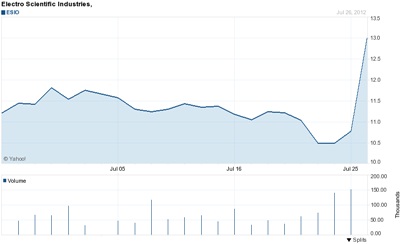 ESI stock: up 20% on positive outlook

Electro Scientific Industries (ESI), the provider of laser systems used in a variety of semiconductor and consumer electronics manufacturing steps, has posted a sharp sequential increase in revenues, and is seeing early signs of a recovery in its key markets.

At $59 million, revenues for the Portland, Oregon, firm’s opening quarter of fiscal 2013 were up 30% on the prior quarter – although they remained much lower than the equivalent period last year, when the company posted sales of $77 million in a much stronger demand period.

That increase in revenues was not quite enough for the company to post a quarterly profit, but it did manage to narrow pre-tax losses significantly, from $10.4 million in the prior quarter to $1.7 million. A year ago, it had posted a pre-tax profit of $8.1 million.

Consumer electronics momentum
Although there are scant signs of a recovery in parts of the semiconductor industry, where the memory and high-brightness LED sectors remain plagued by overcapacity for now, the continued investment by smart phone and tablet PC manufacturers is helping to boost orders at ESI.

CEO Nick Konidaris told investors that the company’s fast-growing backlog had swelled to $84 million by the end of June – the highest level registered in more than six years.

Konidaris said that with the ongoing uncertainty in the macroeconomy, and in many parts of the semiconductor industry that make up ESI’s traditional business, the company would be relying largely on more design wins to drive business in the near term.

Happily for ESI, that appears to be happening in certain advanced manufacturing applications, where its laser systems are used for microfabrication steps. One example is the 3510 system highlighted by Kodaris, which benefits from the fact that multi-layer ceramic capacitors feature widely in smart phones.

Upbeat outlook
The company also has high hopes for its Accuscribe 2600 LED wafer scriber, which is said to be the only laser tool on the market that is suitable for scribing the highest-quality LED wafers used for solid-state lighting applications.

In the latest quarter, revenues from sales of LED scriber tools increased slightly, but Kodaris said that this product would only reach its full potential once the SSL market really starts to take off and demand for capital equipment from chip makers returns.

The Accuscribe 2600 tool is sold through ESI’s New Wave Research unit, acquired back in 2007, and in the most recent quarter the parent company has invested further in laser technology with the acquisition of the France-based fiber laser specialist Eolite Systems.

Despite the market uncertainties, ESI gave an upbeat prediction for the current quarter, in which its executive team is expecting sales to grow to between $75 million and $80 million, together with non-GAAP earnings of $0.15-0.20.

"Activity related to consumer electronics remains brisk,” Konidaris concluded. “Although this business is lumpy given the timing of design wins, we are excited about the number of growth opportunities we see.”

“At the same time, the DRAM, LED, and MLCC markets continue in overcapacity and slow growth in the macroeconomic environment adds uncertainty around the timing of improvement in these markets.”

That assessment was enough to send the company’s stock price soaring by more than 20% in early trading following the results announcement. With its shares valued at just over $13 on the Nasdaq exchange, the company’s market capitalization stands at roughly $400 million.