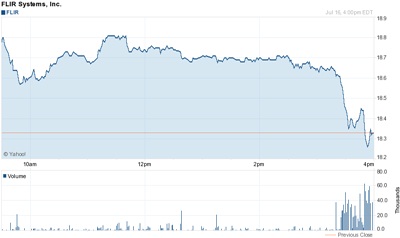 The company, headquartered in Portland, Oregon, now expects sales for the second quarter of the year – ended June 30 – to come in at around $338 million. Assuming that the figure is confirmed in FLIR’s official earnings release next week, it would represent a 3% sequential drop on the opening quarter of 2012.

But the weak demand environment now looks likely to have a much more significant impact on the results for the full year than previously thought, says FLIR, adding that it has once again cut costs to prop up margins.

Additional cost-cuts
In late April, after a weak quarter described by CEO Earl Lewis as “not up to our standards”, the company had predicted that full-year sales would reach between $1.55 billion and $1.65 billion.

But that forecast has now been slashed by nearly one-tenth, to between $1.40 billion and $1.50 billion.

Profits are expected to be hit to a slightly worse degree, even though FLIR has already taken more cost-cutting actions to reduce outgoings. The mid-point forecast for earnings per share in fiscal 2012 is now set at $1.45, down from $1.65 previously.

“We are disappointed in our second quarter performance," said Lewis in a company statement. "These results caused us to make additional reductions to our cost structure that will be reflected in improved profitability in future periods.” The company is yet to detail the precise nature of those cost-cuts.

FLIR did identify demand weakness across several sectors, but particularly in the recreational marine market in Europe, as one of the reasons for the slump, on top of delays to customer delivery schedules that have hit sales of imaging cores and components from within its “thermal vision and measurement” (TVM) business division.

Silver lining?
The company expects the situation to improve in the second half of the year, however. Taking into account the new sales guidance suggests that revenues in the second half of 2012 should be in the region of $763 million – up from approximately $686.5 million in the weak first-half.

“We are confident that the second half of 2012 will be significantly better than the first half, and we expect to see a resumption of meaningful earnings growth in the fourth quarter,” Lewis said.

Support for that more optimistic viewpoint comes from the company’s growing order backlog, which FLIR says has swelled by $41 million since the opening quarter thanks to stronger orders for its TVM, surveillance and detection segments.

During the latest quarter the company announced sizeable supply deals with both the US Army and the US Navy for marine imaging systems and components, for example.

• FLIR’s stock price dropped by around 3% in afternoon trading on July 16, shortly before the after-hours profit warning. It closed the day at $18.33, which represents a slide of around 30% since March this year.