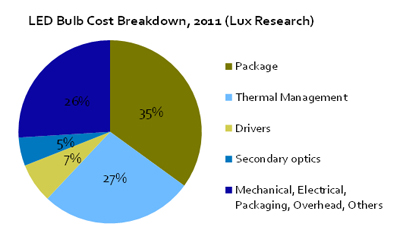 Cost has long been the name of the game with LEDs, but focus is now shifting from the package to the surrounding balance of system, with innovation in areas such as thermal management, drivers, and optics set to halve prices of LED bulbs to $11.06 by 2020, according to Lux Research.

The costs of the central LED package will fall by more than 70% to $2.14 in the next decade, constituting 19% of the bulb costs in 2020. However, to drive overall costs lower – and ensure wider adoption in a market still dominated by incandescent and compact fluorescent lamps – other system costs must be reduced to keep pace.

“Today’s balance of system technology solutions fall short of the dramatic cost reductions needed to mirror the LED package and existing alternate solutions are ineffective and uneconomical, presenting opportunities for technology innovation,” said Pallavi Madakasira, Lux Research Analyst and the lead author of Cheaper, Brighter, Cooler: The Need for Cost Reduction Past the Package. “LED lighting is by no means standardized, and potential disruptions to the component stack abound,” she added.

Lux Research analysts studied the key LED cost stack components of a 60 W incandescent equivalent LED bulb as well as the technologies available to accelerate cost cuts in order to understand the true pathways to LED bulbs’ potential. Among their findings:

Secondary optics account for about 5% of the total cost of a 60 W equivalent LED bulb. The field is dominated by specialists such as Ledil, Khatod, and Fraen, and innovation lies in improving the shape of the beam and the ability to collect more light from primary optics.

optics.org: Which companies are innovating in the development of cheaper LED bulb infrastructure?

PM: In our view, there are not enough players trying to tackle a whopping 39% of cost within the LED bulb – thermal management, power electronics, and optics. For the past decade, the industry has focused narrowly on driving down the cost of the package. And while the benefits have been impressive and the progression logical – focusing on he LED die and package first – we believe that more attention must be paid to the balance of the bulb.

We saw this same challenge in solar, where everyone focused only on the active component, the solar cell, but ignored the inactive materials and balance of system. Those portions of the overall system cost continued to rise while the solar cell cost dropped. The same story is now happening with LEDs. Why no one is aggressively and visibly trying to address this opportunity is bizarre. It’s money on the table.

However, some companies are working in these areas. Nuventix is working on “active” thermal management solutions for LEDs that are likely to drive savings over incumbent aluminum-based thermal management for LEDs. Its technology is called Synjet, which uses an actuator that creates airflow with a silicone diaphragm for heat sinking. 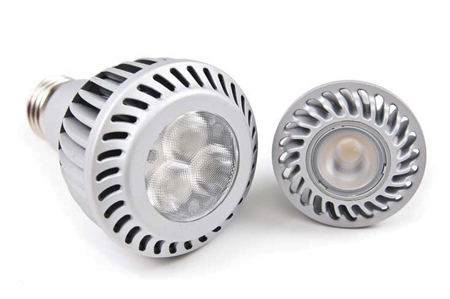 Meanwhile, others such as Cool Polymers are developing thermally conductive plastics that are lighter weight, more formable, and potentially lower cost than cast aluminum heat sinks, while even large players like 3M are commercializing novel plastic reflectors and diffusion films.

optics.org: Is the expected reduction in LED bulb price based on a purely theoretical development or on real production prototypes?

PM: The reduction in costs is theoretical, but based on dozens of interviews and our proprietary cost model. Lux forecasts costs through 2020 accounting for reductions from the package through to thermal management, drivers, secondary optics, as well as mechanical, electrical, packaging components.

This accounts for cost reduction at every level as a result of scale, yield, technology and performance improvements, and reduction (or increase) in material costs for the standard technology used today (with realistic improvements) and for the alternative balance of system approaches. Such cheaper bulbs are not yet available but we believe that such cheaper bulbs will be a reality within the next decade.

Increasing this efficiency lowers the price of the die (in $/lm) as well as the package costs, since as the lm/W of the die increases, fewer dies are required to achieve the same lumen output at the bulb level. We would agree that it is exceedingly hard to be precise, but reasonable to be accurate with the right assumptions.<.p>

Beyond just accuracy in the final number, however, we again wanted to highlight how the share of cost shifts over time away from the LED package to the balance of the bulb. This creates a tremendous opportunity for more innovative technologies to drive down cost even beyond our projections. 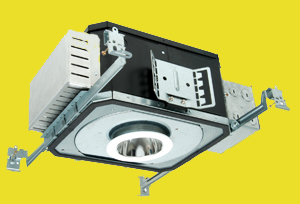 optics.org: Are the price drop implications both for LED and for OLED bulbs; have you factored in the likely cost implications of legislation further prohibiting conventional light sources?

PM: The Lux report addresses conventional LED bulbs (think of an Edison shape incandescent bulb), not OLEDs. OLEDs for lighting is a completely different story – one our colleague Jon Melnick has exhaustively covered in his report titled Finding the End of the Tunnel for OLED Lighting.

In that, he forecasts a price decrease from $18/lm today to $0.71/lm on glass and $0.18/lm on flexible substrates in 2020. For comparison, the LED bulb cost we have in the report is at $0.30/lm and $0.07/lm for 2011 and 2020 respectively. But, keep in mind those numbers aren’t really apples to apples since an LED bulb is a completely different form factor and a finished product, whereas the OLED lighting numbers Jon forecasted represent an OLED lighting panel (materials, capex, labor, driver electronics), but not necessarily something you would see on the shelves of hardware stores.

Legislation would not impact the cost of LEDs, but rather the cost of incandescent or CFLs. In any case, we did not factor in the added cost implications of such legislation in to our model in this report. Any legislation that will either prohibit the use of conventional light sources will only further aid in the adoption of LEDs in all segments of the market, which could bolster cost reductions based on more dramatic economies of scale – but we’d expect it to be marginal since our projected uptake of LEDs is already quite high by 2020.