Current cycle of consolidation is playing an essential role in filtering out uncompetitive technologies, says analyst. 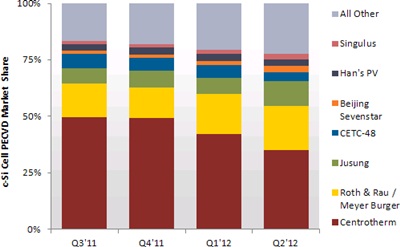 A new report from the photovoltaics market research firm NPD Solarbuzz predicts that a technology roadmap for the PV industry will emerge by the middle of next year, bringing it into line with other sectors - notably semiconductor manufacturing - and creating new opportunities for equipment vendors.

According to the latest edition of the Solarbuzz PV Equipment Quarterly, the roadmap will be established by the top-tier manufacturers of crystalline silicon cells in mainland China and Taiwan, where the vast majority of those cells are currently made.

Although they are all producing the same basic product, each of those manufacturers uses a slightly different manufacturing process, limiting the ability of the industry to act in unison to push cell conversion efficiencies higher and reduce the cost of solar electricity.

The Solarbuzz report suggests that of all the crystalline silicon cells made in 2011, less than one-sixth of cells produced by top-tier manufacturers offered a conversion efficiency of 18% or higher.

“This lack of synergy has been a factor preventing cell efficiencies from reaching the 20% level,” states the report. “However, through collective efforts in implementing a new PV technology roadmap, [three-quarters] of tier-one cell crystalline silicon capacity will fall into this high-efficiency category by the end of 2015.”

Solarbuzz analyst Ray Lian adds that the current shake-out of the PV industry, which has seen widespread consolidation and bankruptcy, is playing a critical role in “filtering out uncompetitive technologies”.

He believes that the 400 or so manufacturers of cells and thin-film PV products that existed in 2011 will slump to less than 100 by 2016. CdTe panel specialist First Solar and the top rung of crystalline silicon cell makers already account for much of the world’s production, and Lian predicts that the top 20 firms will make more than 60% of all cells by the same year.

In the thin-film segment, the shake-out will leave only 13 manufacturers with a production output in excess of 100 MW by 2016, Lian adds.

Lean times for equipment firms
Spending on PV manufacturing equipment remains extremely weak for now, with Lian describing the degree of market demand as “confined to maintenance-only levels”. That is likely to remain the case for the next year, as excess capacity in the supply chain slowly becomes utilized.

But with both silicon and non-silicon PV costs likely to reach record lows by mid-2013, this will coincide with the emergence of the technology roadmap, a collective focus on efficiency gains and – finally - new opportunities for equipment vendors.

Today’s excess capacity in the PV industry is largely the result of rapid expansion and investment by Chinese manufacturers, combined with reduced demand from Europe resulting from cuts to subsidies and PV feed-in tariffs.

But it now appears that the Chinese government is stepping up its efforts to deploy PV, and helping to eat up inventories. According to another analyst firm, this time IMS Research, PV installations in China during the second half of 2012 will reach 4 GW, and somewhere between 5 GW and 7 GW for the year in all – more than doubling the figure of just under 3 GW in 2011.

That is because the country’s National Development and Reform Commission (NDRC) has increased its own target for PV deployments. By 2015, it now wants to see 21 GW of installations, up from the previous level of 15 GW, says IMS Research analyst Frank Xie.

“With European demand set to shrink from the second half of 2012, China’s domestic market will become increasingly important,” he reports. “China’s latest move will help to support the huge amount of production capacity added by Chinese suppliers in the last two years by increasing domestic demand.”

The growth in demand comes from a combination of utility-scale installations in China’s desert regions and large commercial rooftop projects, adds Xie.

Despite the widespread consolidation and additional demand from China, PV prices are still falling. The new report from IMS Research suggests that price erosion will continue because supply still easily outstrips global demand, with ongoing overcapacity at the polysilicon, wafer, cell and module stages of the supply chain.

Average wafer and polysilicon prices each dropped 11% between the final quarter of 2011 and the first quarter of 2012, and are expected to have continued that slide in the quarter that ended in June.