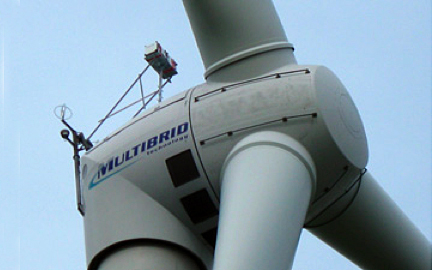 Wind power: the laser can measure the whole wind-field in front of a turbine.

Researchers based at the University of Stuttgart, Germany, are using a lidar system to control and optimize performance of wind turbines. Lidar technology – Light Detection And Ranging – is a remote sensing technique that allows the measurement of the wind field at certain distances.

The system uses a combination of a commercial device and an in-house developed scanner from the Stuttgart scientists. The scanner allows the laser beam to be steered in any direction so that the laser can measure the whole wind-field in front of the turbine at arbitrary points. The system was installed on top of the nacelle of the two-bladed Controls Advanced Research Turbine CART2, located on the test site of the US National Wind Technology Center (NWTC), based in Boulder, Colorado.

This novel predictive control technique enables the turbine to react to the inflowing wind field before it actually reaches the turbine’s rotor thereby minimizing the load-stress and increasing the energy production. If both metal fatigue and extreme loads can be reduced over their typically 20-year lifetime wind turbines can be designed to be lighter and more economical – thus more efficient and productive.

Stuttgart’s Wind Energy group is led by Prof. Po-Wen Cheng, who says that the recording of wind field-data using the LiDAR system is becoming increasingly important to the industry due to the increased costs of measuring masts and the demand for high temporal and spatial resolution wind field measurements.

The technology uses the run time difference of the laser beam reflecting at aerosols for the determination of wind speed and wind direction. The remote sensing techniques enabled by the lidar offer significant advantages, in particular for offshore applications. 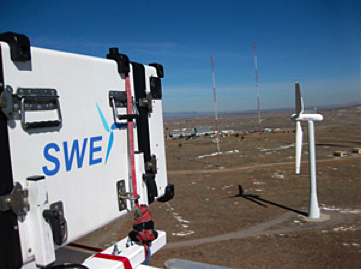 Fan club: Stuttgart partnered with NREL for the project.

As part of theGerman Federal Ministry of Environment-funded joint project, this LiDAR technology will be developed further to support other RAVE research projects on the offshore test field known as Alpha Ventus.

The measurement methods to be developed will be directly applicable to power performance measurement. Loads on wind turbines are expected to be reduced through the detection of so-called wake wind fields and their simulation, as well as the recording of an approaching wind field using new control strategies. Amongst others data, measurements from the nacelle will be used to verify such results.

In May 2012, after the first LIDAR feed-forward controller field tests were successfully demonstrated, Bischoff commented, “We have succeeded for the first time worldwide using a nacelle-based lidar system and predictive control methods to lower the loads acting on the turbine. We were supported by our colleagues from the National Renewable Energy Laboratory (NREL) in Boulder, Colorado.”

The joint campaign between Stuttgart and the NREL team commenced in February 2012. Two units each equipped with a LiDAR system were constructed for test purposes: “CART3“ (with 3 rotor blades), on which a commercial device was employed and “CART2” (a 2 rotor blade model) on which the SWE's LiDAR system would be tested.