Lidar scanning of the skeleton followed by volumetric modeling gives a new estimate of the mass of a famous dinosaur. 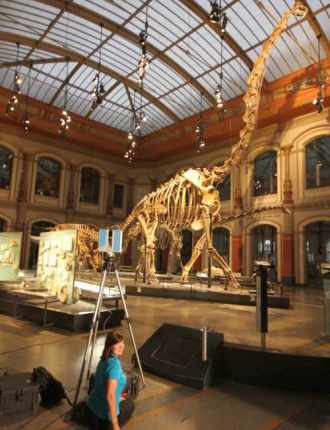 Estimating the mass of an extinct animal is useful in attempting to understand its traits and behavior, but arriving at a reliable figure can be difficult.

A team at the University of Manchester has developed a new method for doing so that shows promise, by applying a lidar scanning technique to one of the largest mounted dinosaur skeletons in the world. The findings are published in Biology Letters.

Starting from the principle that the best estimates of dinosaur mass come from a volumetric approach, whereby a model of the animal is created and its mass then calculated via its density, the team scanned a complete skeleton using a lidar scanner supplied by Z+F, specialists in laser scanning and data capture.

The patient was a renowned dinosaur skeleton at Berlin's Museum of Natural History, where a complete 22-meter-long Giraffatitan (the dinosaur formerly known as Brachiosaurus) has been assembled.

"Lidar has been used before to scan dinosaur remains, and in fact we did so ourselves in 2009," commented Bill Sellers of the University of Manchester to optics.org. "However the equipment has got a lot better in the last few years, and the scanning procedure was much easier and quicker this time."

A volumetric modeling process was then sequentially applied to the different segments of the animal, ultimately deriving a tightly stretched skin, or minimum convex hull, from the lidar point cloud. This gave a final, albeit somewhat unrealistic, volume for the dinosaur. Combining this with a reasonable estimate for mean body density would give an equally unrealistic mass.

Complex skeletons
To arrive at an actual mass figure, the team applied the same lidar technique to skeletons of several extant species, including polar bear, giraffe and elephant, to examine the relationship between their minimum convex hull volumes and that of actual animals where a mean body density is known.

"We tested this method on 14 large-bodied mammalian skeletons and demonstrated that it consistently underestimated the body mass by 21 percent," said Sellers. "Applying this rule to the Berlin skeleton gives the body mass for the Giraffatitan as 23,200 kilograms, +/- 2,200 kilograms."

This figure is not widely different from some recent estimates of Giraffatitan's mass made by other means, and there are caveats involved in applying the approach to a structure as varied in density from end to end as that of Giraffatitan. The lidar scanning also presents its own challenges, but Sellers believes that the method holds promise as an objective and potentially automated method to work out the masses of extinct animals.

"The skeletons are extraordinarily complex in terms of shape, and whereas you can normally get a very good representation of a 3D object with only a few scans, we need to use quite a lot of scans to get a good reconstruction," he said. "We used 25 in this paper, which means that the data files are enormous, although they get rapidly edited down to a more manageable size. Also, a lot of skeletal elements are rather thin, so you commonly get misalignment in the scans. We used targets to help this and the current application is quite forgiving, but it was challenging."