Examination of tissues drawn from Otzi gives an insight into blood cell degradation over fifty centuries. 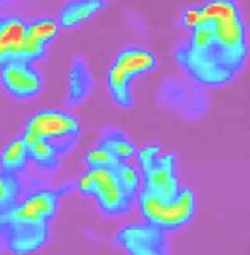 Since his discovery in the Ötztal Alps in 1991, the well-preserved mummy known as Ötzi the Iceman has given researchers remarkable insights into the life of this citizen of Copper Age Europe and his death around 3200 BC.

His latest revelation comes via a team of researchers from the European Academy of Bozen/Bolzano (EURAC), Italy, and Munich's Ludwig-Maximilians University, which has successfully drawn samples of red blood cells (RBC) from the body and analyzed them spectroscopically. The findings have been published in Journal of the Royal Society Interface.

"Up to now there had been uncertainty about how long blood could survive, let alone what human blood cells from the Chalcolithic period, the Copper Stone Age, might look like," said Albert Zink, head of the Institute for Mummies and the Iceman at EURAC. "But our examinations show an unambiguous identification of RBCs in a 5300 year old mummy."

It had been assumed that no blood samples were likely to be possible from Ötzi, owing to autolysis within the corpse. But X-ray and computed tomography images of the body later gave the first hints of blood residues in certain areas.

To examine further, the team took tissue samples from the area of Ötzi's back where he appears to have been struck by an arrow, along with samples from a laceration on the right hand. Examination of thin sections with an atomic force microscope indicated the presence of cells whose size and shape approximated those of healthy, dried red blood cells.

Centuries of cell degradation
More detailed insights came from the use of Raman spectroscopy, which relies on ineleastic scattering of incident light to study the vibrational, rotational, and other low-frequency modes in a system.

To examine tissues from Ötzi, the team employed a confocal Raman spectroscope using an excitation wavelength of 532 nm. The resulting datasets were filtered for Raman bands specific to proteins including porphyrin, a characteristic building-block of hemoglobin. To avoid the risk of photodegradation from the analysis, the laser power was limited to 1 mW.

"Raman spectra were taken from the Iceman samples and compared with reference whole blood and RBC spectra," said Zink in the paper. "The stretching vibration modes characteristic of hemoglobin dominated the spectrum of the corpuscle in the first Iceman sample, suggesting that the ancient particle is a RBC. However, the scattering intensity was approximately an order of magnitude weaker than that of the recent blood samples, pointing to a decrease in the RBC-specific metalloprotein hemoglobin and a degradation of the cells."

The second sample showed significantly different Raman spectra, dominated by the presence of the fibrin proteins involved in coagulation after an injury. "The clotting process that occurs while blood dries explains the spectral combination," commented Zink. "One hypothesis was that fibrin was formed during the clotting, and therefore found in a large concentration in the dried blood spots."

Taken together, the observations fill in further details about Ötzi's fate and confirm that the Iceman sustained several distinct injuries before his death.

There may yet be implications for modern forensics from the findings, according to the team. It remains difficult for an examiner to determine how long a trace of blood had been present at a crime scene, but a better understanding of how the microstructure of blood cells and minute blood clots degrades over time might lead to a breakthrough in this area, thanks to the fifty-three centuries of perspective on the subject that Ötzi can provide.