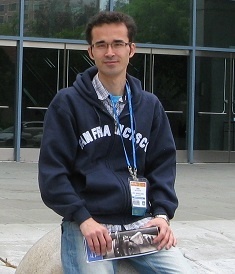 The presidents of four international optical societies have written to the leader of Iran, calling again for the release of Omid Kokabee, an optics student who was last month sentenced to a ten-year jail term in Tehran.

An Iranian national, Kokabee had been studying at the University of Texas for a PhD degree in optics. But he was detained at Tehran airport while visiting his family in February 2011, and is believed to have been charged with “communicating with a hostile government” and “receiving illegal earnings”.

In a letter addressed to Grand Ayatollah Ali Khamene’i, sent via Iran’s United Nations ambassador Mohammad Khazaee, the four society presidents call for the sentence to be “immediately overturned” so that Kokabee can return to his academic studies, and warn that the action could lead to the exclusion of Iranian researchers in major international projects.

“The science research community is a global community that considers Iran an important member,” wrote SPIE’s Eustace Dereniak, Duncan Moore (the ICO president), Tony Heinz (OSA) and Hervé Lefèvre (EOS), whose members represent 170 countries. “We are concerned that Mr Kokabee’s treatment will discourage Iranian students and researchers from pursuing educational opportunities that could benefit their home country and the world at large.”

“Additionally, this may lead to the exclusion of Iranian researchers from international collaboration and multi-national projects like the Synchrotron-light for Experimental Science and Applications in the Middle East (SESAME).”

Online campaigns
The letter also raises the suggestion that the sentence handed down to Kokabee may have been due to a misunderstanding of the nature of the research that the graduate student had been pursuing, stressing that he had been working on a photonics project rather than a more sensitive subject.

“It is our understanding that Mr Kokabee has no training in nuclear physics, is not politically active, is not associated with any political movement in Iran and has consistently denied all charges against him,” it notes.

It isn’t just optics societies that are campaigning for the optics student’s release. Following his recent imprisonment, Amnesty International included Kokabee on a list of some 32 students currently detained in Iran, along with another 14 people working in education.

Last week, the New York-based Committee of Concerned Scientists set up a petition calling for Kokabee’s release, in which it stated:

“Some reports indicate that Kokabee might have been suspected in the exchange of information on nuclear technology. As scientists, we can assure you that his research and studies had nothing to do with nuclear energy. His education and his PhD project are in optics. He appears to be a talented young scientist whose studies have been interrupted for no good reason.”

According to an article published online by Nature, Kokabee has also claimed in letters sent from the Evin jail in Tehran that he has not been allowed to speak with his lawyer.

• To join the call for Kokabee’s release, add your support to the online petitions set up by change.org, Scholars at Risk, human rights activists and the Committee of Concerned Scientists , or via Twitter.