Solid-state lighting technology from Osram has been installed for the Euro 2012 football tournament and the Eurovision song contest. 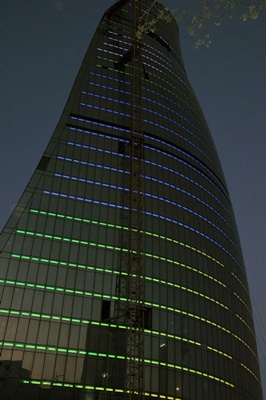 Stadia in eastern Europe have been fitted with tens of thousands of LEDs and solid-state lighting fixtures from Osram, in preparation for the 2012 European Football Championships starting next month.

Held in Poland and Ukraine for the first time, the tournament sees the Olympic Stadium in Kiev – where the final will be staged – and the National Stadium in Warsaw showcasing new, high-efficiency lighting technologies developed by the German company.

Before those championships kick off, LED lighting will also be a feature of the Eurovision Song Contest, which is this year being held in Baku, capital of the oil-rich former Soviet republic of Azerbaijan – a country sandwiched between Russia and Iran on the edge of the Caspian Sea.

More than 10,000 LED-based luminaries from the Osram subsidiary Traxon Technologies will illuminate Baku’s three “Flame Towers”, turning them into giant display screens for the annual celebration of kitsch.

And the same company has provided 1700 LED luminaires to light up the exterior facade of the National Stadium in Warsaw, which will also act as a giant display screen during the Euro 2012 football tournament.

The stadium facade will be set up to either display the red and white colors of the Polish national team, or details of players and match scores, while segments of the Warsaw venue’s “interwoven shell” design have been fitted with dimmable Linear XB 36 LED luminaires, as well as an intelligent light management system.

Osram’s LED-manufacturing subsidiary, Osram Opto Semiconductors, has also supplied 30,000 light-emitting chips to illuminate the stairs to the entrance of the Olympic Stadium in Kiev, as well as a large bar area.

Meanwhile, fully two kilometres of Osram’s “Linearlight Flex” LED lighting strip are set to be installed in the Lviv stadium in Ukraine, to light up some secluded and typically dark areas of the venue to help improve safety.

These high-profile installations are not the first time that LED lighting has been used in football stadia, however. For example the Allianz Arena in the north of Munich, which is home to both the city’s two football teams and will host this month’s European Champions’ League final, is at present the only football venue that can switch the color of its entire facade. 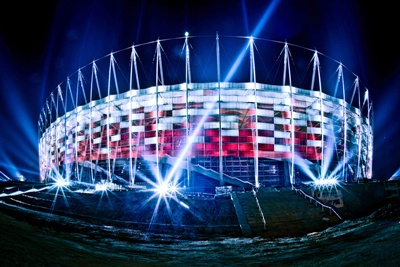 That allows it to show the appropriate colors of the Bayern Munich and 1860 Munich teams when they are playing at the stadium.

The 2010 Football World Cup in South Africa and the 2008 Beijing Olympics also featured new demonstrations of solid-state lighting, since when the cost of the technology has dropped markedly.

Solid-state lighting has also been identified by the European Commission as a key technology area for major investment, including high-profile public procurement activity - and an expansion of its deployment was recently described by commissioner Neelie Kroes as a "no-brainer".