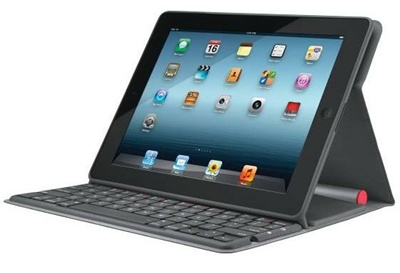 The dye-sensitized photoelectric devices were initially developed by Michael Graetzel from the Laboratory of Photonics and Interfaces at Switzerland’s Ecole Polytechnic Fédérale de Lausanne (EPFL), hence their name.

The particular cells that feature in the range of iPad-targeted keyboards launched by Logitech earlier this month are being manufactured by the Cardiff, UK, company G24 Innovations (G24i), which says that the development represents the “first major application of game-changing dye-sensitized photoelectric cells”.

Those G24i cells are fitted onto the base of what Logitech calls its “solar keyboard folio” – actually a case that both houses the keyboard and allows the tablet to be supported at the kind of angle that a notebook computer is normally used.

According to Logitech, once fully charged the light-powered keyboard can operate for two years at a modest use of two hours per day – by which time at least two new versions of the iPad are likely to have been released.

G24i president Bracken Darrell said: “This signals the future of small electronics. G24i is at the forefront of a whole new class of sustainable, self-powered products that don’t need charging or replacement batteries. You buy them and they need nothing but light.” 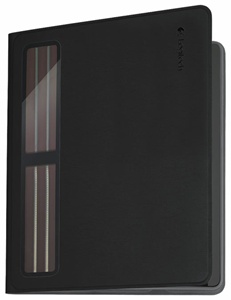 Light versus batteries
That light does not need to come directly from the Sun. Light from a desklamp or indoor ambient light works just as well, it is claimed, while G24i is in fact optimizing its devices for their response to ambient light.

The new keyboards do come at a significant price premium, however. According to Logitech, the “Solar Keyboard Folio” will sell in North America and Europe at a suggested retail price of $129.99, compared with only $29.99 for a similar battery-powered wireless keyboard.

For a consumer, the additional $100 would likely represent a decade’s worth of replacement batteries – much longer than the lifetime of a typical computer peripheral.

Graetzel cells, first demonstrated by their eponymous inventor more than two decades ago, work by mimicking photosynthesis. An organic dye in the cell film absorbs light to create charge carriers, while a porous metal oxide layer and a liquid electrolyte allow transport of electrons and holes to generate electrical power.

These types of cells are not normally very efficient at converting light into electricity, and so are not generally seen as good candidates for large-scale solar power generation. But they can be made relatively cheaply, and recent developments suggest that much higher efficiencies could be on the way.

Record cell claim
According to the US National Renewable Energy Laboratory’s latest chart illustrating the highest-efficiency research-grade solar cells, the record for dye-sensitized devices currently stands at just under 12% (compared with around 25% for crystalline silicon cells and more than 43% for multi-junction devices).

NREL’s figures relate to the standard solar spectrum, but last month G24i claimed to have demonstrated Graetzel cells capable of converting indoor light into electricity at an efficiency of 26%, smashing its previous best of 15%. Indoor light has a narrower spectrum than sunlight, so the calculation of efficiency conversion differs significantly.

According to the company, the increase results from new dye and electrolyte materials in the cell composition that can deliver a higher voltage. G24i’s COO, Richard Costello, also commented that switching to the new cell composition would be relatively straightforward because it would not require a new production fab.

The breakthrough is said to be based on recent work by Graetzel and colleagues at EPFL, although the company did not give specific details of published technical papers or confirmation of the result by a qualifying laboratory such as NREL.

Logitech is not the only blue-chip electronics firm working with G24i. The company has also been collaborating with Texas Instruments (TI) for the past year, with a view to pairing TI’s low-power battery management devices with G24i’s light-harvesting films.