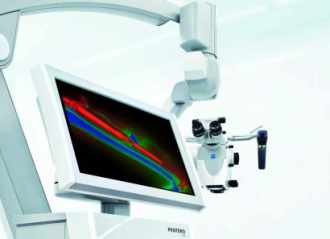 The two systems are the Infrared 800 for fluorescence-based angiography; and Flow 800, an analytical visualization tool for the interpretation of fluorescence video sequences and visual analysis of vascular blood flow dynamics.

The role of fluorescence in the imaging of blood vessels is well established, in a technique called fluorescence-based intra-operative video angiography. This involves injecting a clinically-tolerated fluorescence dye, typically indocyanine green (ICG), into the patient's blood stream, where it binds with proteins in the blood vessels. Using an infrared laser source to induce fluorescence allows a surgeon to monitor the flow of the blood during an operation.

This approach often involves the use of a digital subtraction technique, whereby a "mask" image of the area of interest is taken before the fluorescent marker is administered, and subsequently subtracted from the image when fluorescence is occurring. This removes from the image all overlying structure besides the blood vessels in the area, which would otherwise interfere with an accurate picture of the blood vessels themselves.

Safety and certainty
The Zeiss development is to incorporate the ICG technique into an operating microscope, in this case the company's Opmi Pentero 900 surgical microscope platform. A microscope-integrated infrared source illuminates the operating field, and intravascular fluorescence from within the blood vessels is imaged using a video camera attached to the microscope.

"The integration of fluorescence technology into the surgical microscope offers the surgeon more safety and certainty in clinically ambiguous situations during the procedure," commented Riccardo Giunta of Munich's Ludwig-Maxilians University. "Blood flow anomalies can be quickly detected, and the required surgical interventions initiated immediately. The method can predict the complication-free healing of skin and tissue grafts and provide initial indications of thrombosis."

Carl Zeiss Meditec believes that it can now further expand the fields of application for fluorescence methods in plastic and reconstructive surgery. "The results of our studies are very promising, as they underscore the clinical benefit and innovation potential of the methods for use in different applications," commented CEO Ludwin Monz.

• Carl Zeiss Microscopy has announced that its multiphoton confocal microscopes now permit the simultaneous use of two laser sources to exploit non-linear optics (NLO) effects, or one laser with an optical parametric oscillator (OPO).

In dual-laser systems, different laser wavelengths simultaneously excite several fluorescent dyes or proteins, allowing users to image specimens with one wavelength, and manipulate them in the multiphoton mode with another. Such systems are used in particular in intravital microscopy, a technique used to observe biological systems in vivo at high resolution, for example in the brain of a mouse.

An OPO increases the excitation range of multiphoton microscopy up to 1300 nm, and therefore covers in particular the absorption peak of red fluorescent proteins such as mCherry, mPlum and tdTomato. The potentially high intensities of the OPO lasers allow interaction with specific structures in the tissue, leading to a doubling and tripling of the oscillation frequency through a non-linear effect. Frequency tripling is especially visible in structures with inconsistent optical density converge, such as lipid-water boundaries between membranes and cytoplasm.