Spectroscopy and security could both benefit from a Georgia Tech scintillator crystal based on nanopowders. 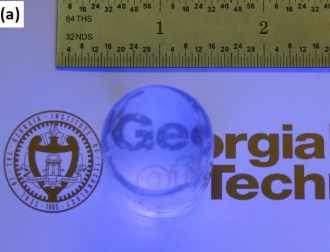 Detecting the tell-tale gamma radiation that might indicate the presence of nuclear devices or materials is a pressing concern for anti-terrorism efforts, and technology to do so is now considered vital by security agencies in the United States.

A team at the Georgia Tech Research Institute (GTRI), the applied research arm of the Georgia Institute of Technology, has demonstrated for the first time a glass-matrix-based scintillator for gamma-ray spectroscopy which features potentially low fabrication cost, along with high chemical and mechanical stability.

The work was presented at SPIE DSS 2012 in Baltimore, and opens the door to glass and glass-ceramic scintillators as promising candidates for gamma-ray detection, if the resolution can be further improved.

Currently, radiation detectors are commonly based on scintillation crystals or solid-state technology, but both forms have some inherent problems.

Scintillation detectors, often employing a single crystal of doped sodium iodide or similar material which exhibits luminescence when excited by ionizing radiation, can be fragile and vulnerable to humidity.

The alternative is a solid-state detector based on semiconducting materials such as germanium, in which incoming gamma rays register directly as electrical pulses rather than generating a pulse of light. However, these can be less sensitive than scintillators and may require low operating temperatures to perform properly.

The GTRI team's solution has been to develop a composite material composed of nanocrystals of cerium-doped gadolinium halide, held in a matrix of alumino-silicate glass. This can be used as a scintillation material without suffering from the typical drawbacks of such materials.

In particular, working with nanoparticles helps to minimize the problem of optical scattering, which can occur in multi-phase materials due to differences in refraction and badly affects the efficacy of crystal-based detectors.

Nanopowders show potential
"Ideally one would like to extract light uniformly from all regions of the scintillator, and scattering would be detrimental to that goal," said Brent Wagner of GTRI. "One means of reducing scattering is to match the refractive indices of the materials, but that is often not possible. Another is to reduce the size of the particles; as you do so, the efficiency of the scattering decreases."

The team noted that when its nanopowders reached particle sizes of 20 nanometers or less, scattering effects from incoming gamma rays faded considerably. Such nanopowders can in fact be much easier to make than more conventional scintillation materials, and avoid the need for a single large crystal that has zero imperfections.

The GTRI detector combines gadolinium and cerium bromide with silica and alumina. The gadolinium acts as the absorber of the incoming gamma radiation, and then transfers that energy to the cerium which luminesces.

In trials, the material showed a similar gamma-ray detection efficiency to a conventional NaI:Tl detector, and a gamma-ray peak resolution of 27 percent at 662 keV. Smaller is better when it comes to peak resolution however, and Wagner commented that there is room for improvement, compared to the 8 percent resolution of NaI:TI single crystal scintillators.

"We have found that this recipe and similar ones work, but there may be many more," he said. "The beauty of this technique is that it enables us to investigate existing scintillator materials and also look at other novel materials, without having to develop the specialized process to grow large single crystal materials."