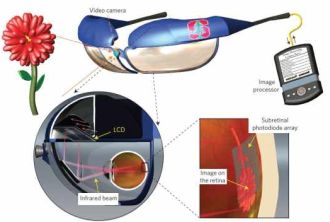 One characteristic of retinal conditions such as age-related macular degeneration is that while the photoreceptors themselves are lost, the neurons in the inner retinal layers largely survive. Hence a number of recent and well-reported trials of implanted prostheses that aim to restore some of the lost vision by electrically stimulating those neurons.

Most of these have faced a set of inherent problems, including how to supply power to the implanted array; the need for intraocular cabling to deliver stimulation signals; and how to transfer the data rapidly enough to be effective. The need for an external camera can also prevent the patient from using natural eye movements to scan a scene.

A team at Stanford University has developed a possible solution, using a photovoltaic subretinal prosthesis in which silicon photodiodes receive power and data directly through pulsed near-infrared illumination, and electrically stimulate the neurons.

The system uses a portable computer to processes video images captured by a head-mounted camera, and video goggles then project these images onto the prosthesis using pulsed infrared at 880 to 915 nm. Because LEDs cannot meet the brightness requirements involved, the infrared projection system makes use of an array of laser diodes coupled into a multimode fibre, to produce high-intensity illumination with reduced coherence.

This design simplifies the implanted circuitry, and eliminates the need for a bulky external power source. It also enables patients to scan the visual scene with their own eyes, within the visual field of the goggles. The findings have been published in Nature Photonics. 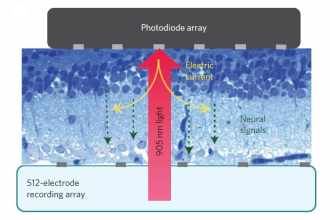 Thin and wireless
"The design uses video goggles to deliver both power and visual information directly to each pixel through pulsed near-IR illumination, eliminating the need for complex electronics and wiring schemes, and preserving the natural link between image perception and eye movement," said Stanford's James Loudin in the paper.

"We have demonstrated the plausibility of this design through successful in-vitro stimulation of healthy and degenerate rat retina with NIR light intensities at least two orders of magnitude below the ocular safety limit. We also demonstrate the possibility of high-resolution stimulation with retinal responses elicited by a single 70 micron bipolar pixel."

Because the photovoltaic implant is thin and wireless, the surgical procedure is much simpler than in other retinal prosthetic approaches, and the system considerably reduces the bulk of the implanted components.

In the lab trials, the Stanford team placed a rat retina between a photodiode array to receive the incoming signal, and a multi-electrode array (MEA) to stimulate the neurons. The MEA measured 1.7 mm2, while two sizes of photodiode array were constructed: 0.8 x 1.2 mm for implantation into rats, and 2 x 2 mm for potential use in larger animals.

"Surgeons should be much happier with us," commented Loudin, envisaging the practical use of the technology. "Other approaches require pretty big pieces of hardware to be stuck in the body, 1 to 2 cm in size. We have just the one implant."

The demonstration reported in Nature Photonics is described by Loudin as proof-of-concept, and further work will be required on issues of biocompatibility, stability of the material and the development of safe surgical procedures.