Germany-headquartered optics giant Jenoptik says that demand from the semiconductor industry was better than it had expected in the opening quarter of the year, but its CEO Michael Mertin has lingering concerns about the European debt crisis and recent political developments.

Mertin made the comments as the company reported steady operating results and another significant cut in its net debt position following recent financial restructuring activity.

New CFO Andreas Günther also welcomed an increase in cash generation from company operations (€13.2 million, up from €8.9 million a year ago) as a sign of good health, stating: “These are solid figures to accompany my start at Jenoptik.”

Mertin highlighted the continued strength of demand from the automotive sector alongside a recovery in semiconductor industry spending as he reported total quarterly sales of €137.7 million – up nearly 11% from the €124.5 million reported a year ago.

Of that total, sales from the company’s lasers and optical systems division amounted to €57.2 million, up slightly on last year, with €43.6 million from defense and civil systems.

But by far the strongest increase resulted from the company’s metrology division, which recorded a 33% year-on-year increase in sales to €37.2 million. And that momentum is set to continue – the same division reported a very sharp increase in order intake of €58.9 million in the quarter, largely the result of a major order for traffic systems from Malaysia.

That order is worth €40 million overall, of which nearly half was booked in Q1. Jenoptik also showed off its new laser scanning system for monitoring speed and red traffic lights at the recent “Intertraffic” trade fair. Available from this autumn, Jenoptik says that the development will make it “the only provider in the world to have all the sensor system technologies for modern traffic monitoring at its disposal”. 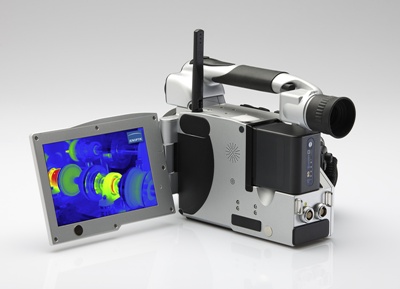 Defense push
Jenoptik has been making a strategic push into the US defense sector recently – it established the Florida-headquartered Jenoptik Defense, Inc in late 2011 to serve the US military and security markets with products such as infrared camera modules.

Orders within the company’s defense and civil systems segment showed a major decline in the latest quarter, compared with last year, although this was largely because last year’s figures included part of a huge deal to provide starter generators for PUMA tanks.

However, the company’s overall order backlog relating to defense applications is up strongly since last year, and in terms of optical products Jenoptik says that its new “VarioCAM HD” handheld, uncooled thermal imaging camera with integrated laser rangefinder is proving particularly popular.

On the bottom line, it was again the lasers and optical systems division that delivered the bulk of Jenoptik’s profits, contributing earnings before interest and taxes (EBIT) of €8.9 million, out of a total EBIT result of €11.6 million – very slightly down compared with last year.

Mertin said that, overall, Jenoptik had performed better than had been predicted at the end of 2011, partly because of the encouraging signs from the microelectronics sector. “Changes in demand from the semiconductor industry naturally affect the group results, but their impact is no longer as significant as it was just a few years ago,” he said.

Political risks
For the rest of 2012, Mertin is expecting continued high demand for lasers used in materials processing applications and the company is currently investing €10 million in a laser diode production capacity upgrade, as well as developing a kilowatt-scale fiber laser in order to widen its offering in this market sector.

But the CEO remains wary of Europe’s precarious sovereign debt situation, particularly in the light of recent political developments in France and Greece, the impact of which is yet to unfold.

“We still see no solution to the debt crisis in the Western countries and political elections are being held, the results of which could bring about further changes,” Mertin said, and perhaps has more faith in the cyclical but perhaps more predictable microelectronics market: “We want to wait and see how the semiconductor industry progresses,” he concluded.