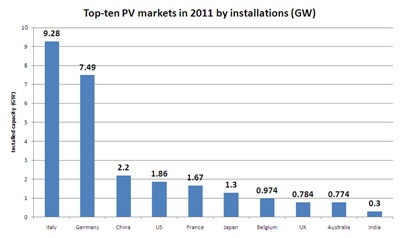 The European Photovoltaics Industry Association’s (EPIA’s) latest annual report on the global PV market has found that the technology can now provide 2% of electricity demand in Europe – with the figure rising to more than 4% for both Germany and Italy, the two largest PV markets in the continent.

The actual proportion of grid electricity provided by PV is somewhat lower - typically three-quarters of the potential contribution - but has increased sharply in the past two years.

With just over 21.6 GW of power-generating PV capacity added in Europe last year, cumulative installations reached just under 52 GW. The vast majority of that capacity has been added since 2000, and over that time period the only other significant additions to capacity have come from gas (116 GW) and wind (84 GW).

And while gas can produce round-the-clock electricity in a more controlled and predictable manner than either of the intermittent wind and PV technologies, trend data over the last three years clearly show the growing impact of PV on the European energy mix.

EPIA says that PV ranked third behind gas and wind in terms of installed new capacity as recently as 2009. But, combined with incentives, the falling price of solar has seen it outstrip both of those rival technologies in only two years. Compared with 21.6 GW of PV, just under 10 GW of both gas and wind capacity was added in Europe in 2011 - while more than 6 GW of nuclear generating power was lost following Germany’s politically motivated decision to close eight of its ageing nuclear facilities.

Incentive cuts
The EPIA report, regarded as among the most credible sources of information for the PV industry, identifies Italy as the leading market in 2011, with 9.3 GW added. Germany ranked second with 7.5 GW, and those two countries together accounted for 60% of global market growth last year.

Elsewhere in Europe, France ranked as the third-largest market with 1.7 GW installed (up from 0.7 GW in 2010), while installations in the UK rocketed from a barely noticeable 62 MW in 2010 to 784 MW last year – representing year-on-year growth of nearly 1300%.

The UK government has since acted to halt the runaway market by slashing the generous feed-in tariff incentive established in early 2010, just before the recent collapse in PV prices caused by massive oversupply.

Similar actions in the much larger German and Italian markets are also being taken – although Angela Merkel’s government now faces a challenge to its impending incentive cuts, and with recent election losses may find it tougher than anticipated to implement those changes.

Two key challenges
EPIA president Winfried Hoffmann highlighted the challenges now facing an industry in which bankruptcies and plant closures are being reported on a near-weekly basis, with German manufacturers suffering in particular:

“The PV industry is now weathering a period of uncertainty in the short-term,” he understated. “But over the medium- and long-term, the prospects for continued robust growth are good.”

“Policy support has been crucial to getting PV to this place in its development – just as it was crucial to helping develop all other energy sources (fossil and nuclear) in the past,” Hoffmann added. “But now PV needs to demonstrate that it is on the way to becoming a mature industry, ready for the next stage of its development.”

That development relies on two key changes: much greater internationalization of the PV markets away from its European domination; and a move towards markets and business models that rely far less on central subsidies.

“If PV is to continue growing, the balance of development will have to shift to new markets, both inside and outside of Europe,” notes the EPIA report. “A situation in which Germany and Italy account for nearly 60% of global market growth is unsustainable.”

That global change is already under way. In its report, EPIA says that 7.8 GW of PV capacity was added outside of Europe last year, up from 3.4 GW in 2010.

Because there has been far lower penetration of PV outside of Europe in the past decade, the technology is capable of meeting only 0.5% of global electricity demand at present (or 1% of peak electricity demand, which spikes during the day in warmer climates where the use of air-conditioning is prevalent).

But with the US and Chinese markets for PV now growing quickly, and China, India and Japan all committed to extensive PV build-out plans, it is clear that demand is already diversifying geographically.

Uncertain forecast
EPIA’s forecasts for 2012 reflect the huge uncertainties facing the PV market right now – it is expecting anywhere between 20.2 GW and 40.2 GW of installations this year – but what is clear from those forecasts is that the Asia-Pacific (APAC) and Americas regions will make up a much greater proportion of the total demand.

Between 6.4 GW and 11.5 GW is expected for the APAC market, while the Americas region is a little more predictable, thanks to the nature of the large-scale build-outs in the US that are already in progress. The Americas should account for between 3.3 GW and 4.4 GW of installations this year, mostly in the US. 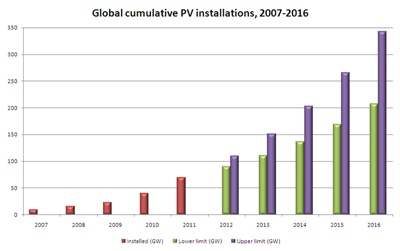 Europe, with its political developments and ongoing sovereign debt problem, is most uncertain of all, with EPIA suggesting between 9.4 GW and 21.6 GW of installations this year.

In the longer term, EPIA acknowledges that with support mechanisms shrinking fast, the industry faces huge challenges, noting that “recent deployment rates can no longer be taken for granted”, and that maintaining the momentum of recent years will require “smart, measured policy support that moves beyond feed-in tariffs and towards other incentives, such as removal of administrative barriers”.

“The challenge may seem daunting,” it concludes. “But the fact that the global market for PV has continued to grow even in times of economic crisis shows there is a demand that can withstand a difficult period.”