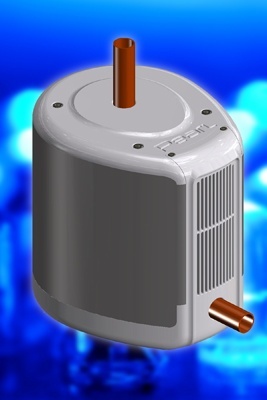 Engineers at the US firm Sensor Electronic Technology (SETi), a long-time leader in the development of ultraviolet LEDs, have made a chip with a record-breaking efficiency in the so-called “UVC” wavelength range needed for germicidal applications.

Corresponding to a wall-plug efficiency of 8%, the research-level GaN-on-sapphire device represents a significant advance in performance (SETi claims a five-fold improvement), and demonstrates that solid-state devices are capable of challenging the incumbent mercury lamp technology – which is more efficient and powerful at present, but not suitable for portable applications.

That compares with a previous best of 9.2 mW at 260 nm, demonstrated by Crystal IS last year, but SETi told optics.org that its device requires a far lower forward current to deliver a similar output power level – only 20 mA, compared with the 100 mA reported by Crystal IS.

SETi also points out that when driven at a forward current of 100 mA, its chip produces an output power of 30 mW, and claims that the slightly longer wavelength is actually the best choice for effective disinfection of drinking water.

Whereas Crystal IS’ devices are based on aluminum nitride wafers, SETi uses the more conventional sapphire substrates that are widely used to manufacture blue and white LEDs for solid-state lighting. According to SETi, the latest improvement is largely a result of better light extraction from the chip – thanks to a new transparent p-region based on doped AlGaN, and a transparent p-contact.

SETi has also reduced defect densities, which are caused by the lattice mismatch between the III-V semiconductor layers and the sapphire substrates, improving light-generating efficiency and reducing heat generation as a result.

That is a result of its “MEMOCVD” deposition process – a hybrid technique that combines elements of the more conventional molecular beam epitaxy (MBE) and metal-organic chemical vapor deposition (MOCVD). Using MEMOCVD, SETi has been able to reduce threading dislocation densities and increase the internal quantum efficiency of the UV emitters to 60%.

Remis Gaska, SETi’s CEO, said in a statement announcing the new efficiency record: “This milestone is a very exciting development of UV LEDs, and represents a major step forward in reaching efficiencies of incumbent technologies, such as medium-pressure mercury vapor lamps, which typically operate at efficiencies of 15% or less.”

Consumer markets “within reach”
SETi has previously demonstrated an LED-based system that is able to disinfect drinking water flowing at 0.5 liters per minute using less than 35 mW of optical power at 275 nm - showing more than a 4 log reduction in contamination. “The results from this [latest] development put UV LED disinfection systems within the reach of consumer markets for applications such as point-of-use water purification,” stated the company.

Before that can happen, SETi will need to demonstrate that the record-breaking high-efficiency UV LEDs can be produced using a high-yielding volume manufacturing process to ensure that the costs of the technology are minimized.

Such a transfer from initial demonstration to volume production typically takes around two years, and SETi told optics.org that this would be a reasonable assumption to make.

The company is currently in the process of expanding its manufacturing facility, thanks to a $20 million injection of funding last year. The first phase of that expansion is now completed, with the second phase – which will see a new building filled with epitaxy tools for volume production – is said to be on track.

UV-LED market
Last month, the market analyst company Yole Développement said that the market for UV-LEDs would grow to $150 million by 2016. At present, the vast majority of that market relates to “UVA” devices that emit close to the visible range, and which are used in curing applications.

Getting LEDs to emit in the UVC range (below 300 nm) needed for germicidal applications is much more difficult, but offers a potentially much larger market opportunity in all kinds of water disinfection applications, from spas and shower units to – perhaps most importantly – simple systems to treat drinking water in the developing world.

Next week, US firm and Halma subsidiary Aquionics is due to launch its first LED-based water disinfection product, called the “UV-Pearl”, which will be aimed at low-flow applications where ultra-pure water is needed - typically in pharmaceutical and health care research.

But for more wide-scale deployments that demand higher flow rates, more advances in “UVC” LED output power and efficiency such as SETi’s are critical.

• SETi will present further details of the record-breaking devices at the Conference on Lasers and Electro-Optics (CLEO 2012) meeting taking place next month in San Jose, California.