Developed with the University of Toronto, the system uses VCSELs to monitor blood flow and oxygenation at the same time. 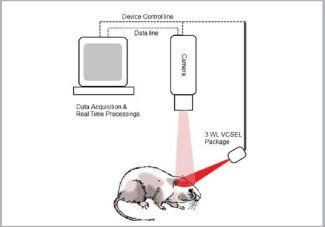 Two measurements in one

A neuroimaging system intended to study the effects of strokes and epileptic attacks has been developed jointly by the University of Toronto and QImaging, the British-Columbia-based supplier of cameras for life-science imaging.

Taking advantage of the properties of vertical cavity surface-emitting lasers (VCSELs), the system combines the measurement of two vital parameters, the blood flow and blood oxygenation, into one unit. Previously, the differing optical requirements of the two tests made the use of a single instrument problematic.

The new technique was also able to statistically distinguish between veins and arteries, something never before accomplished in this particular field, according to the team.

"Now our goal is to create a smaller, portable version of this system that will allow us to image fully conscious, active animals participating in normal behaviors," commented Ofer Levi of the University of Toronto. "This will enable long-term chronic monitoring of epilepsy dynamics and recovery from stroke in pre-clinical animal studies. Our other objective is to create an instrument that can be used for clinical use in patients."

The two established techniques to assess the blood's oxygenation and flow are intrinsic optical signal imaging (IOSI), which maps the intrinsic activity-related changes in tissue reflectance; and laser speckle contrast imaging (LSCI), in which the backscattered light from a laser source forms an interference pattern which changes as the blood cells move.

Coherence requirements
In a paper published in Biomedical Optics Express, the Toronto team indicate that the key breakthrough was the use of a VCSEL source operating at 680, 795 and 850 nm, rather than employing micro-LEDs or other illumination.

"In many applications, it is difficult to apply LSCI and IOSI in tandem due to disparities between the illumination sources required," noted Levi. "While LSCI requires a highly coherent laser source to produce the speckle needed to discern flow, IOSI makes use of a low coherence, wider spectrum source to produce the low-noise illumination needed to measure small fluctuations in reflectance."

The answer was a system that uses careful control of VCSELs to produce illumination satisfying the coherence needs of both tests from a single source, in a specialized current-sweep operation scheme.

When operated near threshold, VCSELs are able to produce highly coherent single-mode laser illumination. But application of rapidly modulated current broadens the effective spectrum of the source, leading to reduced coherence and taking advantage of thermal effects within the small laser cavity. This property is particular to VCSELs, as their small gain volume allows rapid thermal changes to produce spectral effects on a very short time scale.

"VCSELs' power consumption was another significant consideration, especially for a process ultimately intended to be housed in a portable device," noted Levi. "Micro-LEDs can provide slightly stronger illumination than VCSELs but at greatly reduced efficiency, and VCSELs also offer advantages in scenarios with rapid on/off cycles. They are able to reach thermal stability within microseconds following the application of a current, while edge-emitting lasers often require several minutes of warm-up time before wavelength and power stabilize. By using VCSELs for both IOSI and LSCI, stability is ensured and the lasers can be rapidly pulsed in each operation mode."

Using the three rapidly pulsed wavelengths, the system captured images in a 500 × 500 field of view at a frame rate of 60 fps. Reducing the field of view allowed dedicated imaging at rates faster than 100 fps, fast enough to calibrate blood flow velocity maps.

The system employed QImaging’s Rolera EM-C2 electron multiplying CCD (EMCCD) camera, and the company plans to give other labs conducting similar research access to the new technology. "Aside from developing and engineering imaging solutions, QImaging is committed to providing our customers with the knowledge and resources they need to successfully conduct their experiments," said Chris Ryan, associate product manager at QImaging.