Increasingly cautious equipment maker writes down €40 million of inventory but will keep spending more on R&D. 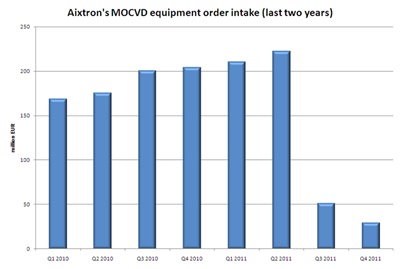 Aixtron, one of the two dominant providers of the metal-organic chemical vapor deposition (MOCVD) equipment that is critical for volume LED production, says that market demand is so weak at the moment that it cannot provide any revenue guidance for 2012 yet.

At first glance, Aixtron’s 2011 results, with sales revenues of €611 million and a pre-tax earnings of €113 million, look solid enough. But the headline figures disguise a year of two distinct halves for the company, in which record-breaking sales in the first six months were suddenly halted by a collapse in orders from Q3 onwards.

The German company’s CEO Paul Hyland told an investor conference call that any upturn was yet to appear in the opening quarter of this year, and that the industry was set to be plagued by overcapacity and price pressure until the next “wave” of LED adoption – for general lighting – emerges.

Exactly when that will happen remains unclear at this stage. And although Hyland is confident that 2013 will mark the start of the era of solid-state lighting, things are set to remain tough until that happens.

Unprecedented boom
Between early 2009 and last summer, demand for MOCVD kit provided by both Aixtron and its main competitor Veeco Instruments had grown to unprecedented levels, driven initially by the rapid uptake of LED-backlit LCD televisions and then by generous subsidies provided by the Chinese government for LED makers in the country.

Unsurprisingly, customers in China accounted for more than half of Aixtron’s revenues in 2011. But a combination of reduced consumer confidence, manufacturing overcapacity and credit tightening - particularly in China – resulted in a very abrupt slowdown from which there is currently no end in sight.

Hyland said that visibility remained extremely poor in what he described as an “extraordinary” market: “The very low order intake in Q4 brings the severity of this downturn even more sharply into focus,” commented the CEO, with Aixtron’s figures showing an order intake of only €29.3 million in Q4, compared with €222 million just two quarters previously.

In fact, Aixtron will now write off some orders. “We have decided to take an even more cautious view of our ability to turn inventory into revenues,” Hyland warned, saying that inventory worth €40 million had been written down “to recognize the risk of an extended downturn overlapping with planned new product releases”. 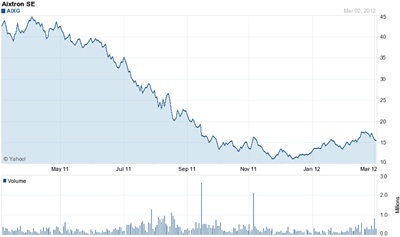 Next wave of demand: 2013
With demand dropping off of a cliff, producing a revenue forecast for 2012 was proving to be far more difficult than in previous years – so Hyland simply told investors that Aixtron would be EBIT-profitable this year, but provided no detailed guidance.

“There is certainly nothing in what we can see today, that suggests any sort of market recovery in the first half of 2012,” the CEO added, although he remains confident that the next wave of LED demand will be driven via a widespread switch to solid-state lighting:

The problem for now is that LED lighting has a market adoption of less than 5%, meaning that the emerging industry has not yet generated sufficient momentum to support the next LED equipment investment cycle.

And while it had been hoped that the subsidized development in China might provide a bridge between the adoption waves of LED TV backlighting and solid-state lighting with LEDs, it is now clear that this won’t happen.

Reinforcing Hyland’s outlook on near-term orders, Aixtron’s CFO Wolfgang Breme said: “We should not expect the first quarter of 2012 to bring us any relief in this regard.”

Maintaining R&D investment
That lack of orders has also resulted in Aixtron cutting 250 contracted employees from its payroll, but one area that will not see any reduced investment is research and development. Last year, the company increased its R&D spending 9% from the 2010 level, to more than €50 million as it completed its “Phase II” laboratory - which will employ 150 people.

This year, Aixtron's R&D spend is expected to rise again, in spite of what is highly likely to be a precipitous drop in sales revenues. Hyland said that continued investment in R&D was critical for the company to develop the more productive MOCVD systems - required by its customers to make cheap but high-quality LEDs for lighting applications:

“It is critical for our customers to be able to unlock the cost barrier to the solid-state lighting market,” noted the CEO. “The common link between our cost-of-ownership reduction abilities and the barrier to the solid-state lighting market is our R&D roadmap and our ability to turn value-added ‘know-how’ and intellectual property into productive manufacturing technologies.”

“And that is why you will find that we are accelerating our investments into R&D - even at this difficult time.”