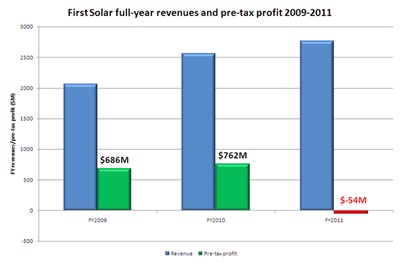 As politicians in Germany contemplate a drastic reduction and possibly even an elimination of the country’s long-standing feed-in-tariff (FiT) support mechanism for photovoltaic (PV) power, First Solar has announced plans to idle four manufacturing lines in Frankfurt and postpone commissioning of its planned new facility in Arizona.

Thanks to the FiT, Germany has been responsible for much of the photovoltaic market boom seen in the past decade and was still rated as the world’s single largest PV market in 2011. But with constraints on government spending across Europe, that support mechanism is now under threat.

The proposals are being presented to Angela Merkel’s cabinet today (February 29) and will also need to pass through the German parliament to come into effect, but Ahearn says that even if the FiT remains in place, the signs are clear – subsidized PV markets will soon be a thing of the past.

The interim CEO, who replaced Rob Gillette after the latter’s shock departure from First Solar last year, has already stated that while the manufacturer of PV modules based on thin films of cadmium telluride (CdTe) will continue to build utility-scale PV plants already commissioned, its future strategy will be aimed squarely at delivering subsidy-free PV.

However, those markets have yet to emerge, and neither have any details of First Solar’s three-year strategy to target them – Ahearn had been due to reveal details of the new plan alongside the firm’s latest financial results, but that schedule has now been put back by three months. 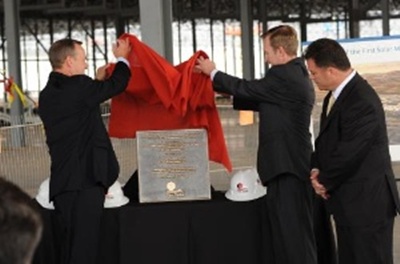 Production cuts
In the meantime, the company will be cutting production costs this year by postponing the commissioning of its 280 MW production facility in Mesa, Arizona, and cancelling its 250 MW site in Vietnam, as well as idling the four production lines in Frankfurt for up to six months (equivalent to an annual production cut of up to 140 MW).

The Vietnam decision was announced last year, while the company had earlier ditched plans for a 125 MW facility in France.

Just a year ago, previous CEO Gillette had envisaged a capacity increase to 2.9 GW this year – indicating the speed with which plans have changed. Last August, Gillette had dedicated the Mesa site, saying that it was already in “advanced construction”, and due to begin producing modules by September 2012.

That about-turn will mean an impairment charge of $100 million to the company in 2012. First Solar also posted a pre-tax loss of $485 million in the closing quarter of 2011, after a large increase in charges relating to the replacement of faulty modules.

First Solar has been aware of this problem, which relates to modules manufactured some years ago, since June 2009, but it appears that deployments to countries with hot climates have seen accelerated degradation of the electrical power produced by the modules. To date, the problem has cost the company $216 million to remedy, with a rush of warranty claims in the latest quarter well beyond previous expectations.

Good news: module efficiency up
The good news for First Solar is that increased investment in research and development has seen the average conversion efficiency of its modules jump to 12.2% in the closing quarter of 2011, up from 11.8% in the third quarter. That improvement will help to offset the impact of the production cuts this year, as the higher efficiency equates to a reduction in the cost of the modules per watt of power produced.

First Solar’s aim is to push that efficiency figure close to 15% by 2015, which should reduce the cost of the technology from around $0.71 per watt now to approximately $0.50, and towards a level that would support unsubsidized deployments – depending on how electricity prices change during the intervening years.

Ahead of that, First Solar says that the company will concentrate on delivering its large existing pipeline of utility-scale PV projects in the US – the 550 MW Topaz and Sunlight plants in California being the two largest that are now under construction. Other, much smaller, projects have recently been signed in China and Australia, but with no major new additions to that project pipeline for some time, and none expected, the writing is clearly on the wall as far as Ahearn is concerned:

“The key to First Solar's [future] success is to develop new markets that do not depend on subsidies, and we believe we can do this by focusing on regions in the world that are blessed with a lot of sun and need more peak electricity,” said the interim CEO in an investor call to discuss the latest financial results.

“Solar electricity has never been deployed without subsidies at the large scale we envision, [and] local utilities, regulators and politicians will need time to understand how to plan and integrate solar electricity into their local grids,” added Ahearn. “Fortunately, our existing US project pipeline provides the level of continuing demand while we work on opening the new markets that will drive our future growth.”

The big question facing First Solar is just how long it will take for those unsubsidized markets to emerge, and how it can best manage its production and development efforts until any substantial unsubsidized demand does arrive. With the market uncertainties that it is seeing 2012, the first part of that strategy looks to be cutting production costs and halting all expansion plans.