A project with a radical approach to providing photonics technology expertise to small- and medium-sized enterprises (SMEs) in Europe is delivering positive results just one year into its term, and will ultimately prove influential in the forthcoming Horizon 2020 innovation program.

That's according to Hugo Thienpont, who co-ordinates the “ACTMOST” (Access Centre to Micro-Optics Expertise, Services and Technologies) project at Vrije Universiteit Brussel in Belgium. The approach has already led to the development of a new handheld optical scanner that is being used in cancer research – one of 12 industry-focused collaborations that it has collaborated on so far.

“After one year of operation there is convincing evidence that our new open innovation model has been very well received by European companies,” said Thienpont, adding that he thinks the completed projects will have considerable industrial impact.

Combining technology from 14 of the continent’s leading research laboratories, ACTMOST is different to conventional development collaborations in that it offers risk-free access to high-level technology for industrial partners at no cost to those partners but instead through European Commission funding.

Photonics was identified as a test case for the novel approach, with ACTMOST offering expertise across the photonics food-chain, from design through to prototyping and packaging. Thienpont says that applications in solar energy, biology, security and component manufacture have already been completed, and that the approach has effectively lowered the barrier for photonics-driven innovation.

Oncology scanner
One of the first projects was with Peira, a Belgian developer of instruments for life science applications. “ACTMOST designed and demonstrated the light engine for Peira's compact handheld scanner that measures and visualizes subcutaneous tumors,” Thienpont told optics.org. The scanner, now a commercial product, provides a non-contact alternative to traditional caliper measurements, with the company’s managing director Hans Nicasy commenting:

“This approach clearly fills the gap of R&D innovation schemes for which currently there are no support instruments at the European level.”

Other small companies to have collaborated with the Brussels-led team so far have included m-LED, Süss Micro-Optics and Anteryon, while some larger companies such as Agfa have also become partners.

ACTMOST was set up primarily with SMEs in mind, and Thienpont explains that the model works slightly differently with larger partners. “They have to match the financial support from the EU with 50% of their own funding,” he told optics.org, adding that Agfa had approached ACTMOST with a project relating to mass production of micro-optical components set to be used in a security application.

So far, the collaborative projects have varied in length from just a few weeks up to an entire year, and Thienpont says that of the 12 projects embarked upon in the past nine months, six have been completed and six are ongoing. The original plan was to target 30-50 projects, and Thienpont is confident that this will be achieved, even though there is only a year of the project still to run.

“During the remaining 12 months we have a strong indication that 20 additional requests for support will be received,” he said. “Because of the strong personal interaction between the ACTMOST photonics experts and the companies, prior to the submission of requests for support, only well-documented and clearly defined proposals are submitted for evaluation to the ACTMOST coordination team.”

Influential force
Thienpont, who is the honorary chairman at next month’s Photonics Europe conference and show in Brussels, also feels that the success of the ACTMOST innovation model will prove to be an influential force within the framework of the forthcoming Horizon 2020 funding program of the European Commission. 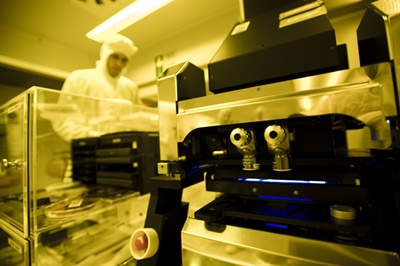 “ACTMOST clearly fills a gap in the innovation support instruments [funded] by the European Union,” he said. “Already after one year of operation it is clear that the model works and is effectively impacting the [partner] companies' businesses. This has not gone unnoticed by the key-decision makers at the EU.”

“They are fully aware that more incentives are needed to support SMEs, which make up more than 60% of the companies in Europe. We therefore hope that in the months to come the Photonics 21 platform and its stakeholders will bring our model further to the attention of the EU, so that our new innovation instrument can be scaled up and optimized in support of continued industrial innovation and job creation.”

“I believe that the new Horizon 2020 framework program most certainly could and should bring that opportunity.”