US set to hit Chinese PV firms with import tariffs

But the stock prices of Suntech, Trina and Yingli all rise sharply after a preliminary determination applies only a small tariff rate. 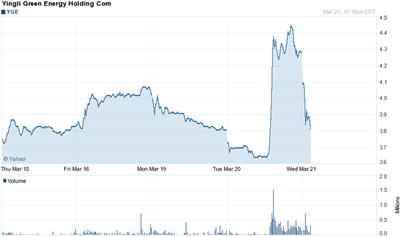 A preliminary investigation of Chinese manufacturers of crystalline silicon photovoltaic (PV) cells by the US Department of Commerce has found evidence of Chinese government subsidies, and has set a level of import duties to be added to the cost of the imported products.

However, the value of shares in the three leading Chinese PV module manufacturers rose sharply following the announcement, with the levels of the duties set to be imposed lower than some had expected.

The Department of Commerce found that Suntech Power, the largest of the Chinese companies in terms of modules produced, had received a countervailable subsidy rated at 2.9%. Trina Solar, ranked as the world’s fourth-largest PV module maker by analyst Lux Research last week, was found to receive a subsidy of 4.73%. All other Chinese PV firms were found to be subsidized at a rate of 3.61%.

As a result of the findings, US Customs and Border Protection will be instructed to collect a cash deposit or bond based on those rates, applicable retroactive to December 2011 – assuming that a final determination later this year confirms the decision.

Chinese manufacturer reaction
Suntech, which IMS Research ranked as the world’s leading PV module vendor by shipments in 2011, saw its stock price rise nearly 10% on the news, with chief commercial officer Andrew Beebe commenting: "This initial decision reflects the reality that Suntech's global success is based on free and fair competition. Nonetheless, unilateral trade barriers, large or small, will further delay our transition away from fossil fuels at a time when the majority of Americans demand cleaner and more secure energy such as solar.”

Suntech has manufacturing facilities in three countries, including a site in Arizona, and Beebe added: “As a local manufacturer…we will continue to remain an active member of the American solar industry and maintain focus on making solar energy affordable for everyone, everywhere.”

Trina, which was hit with the highest tariff, said it remained committed to supplying the US market. It also highlighted that the decision represented only a preliminary determination, and that the final outcome would be subject to further examination and final determinations later this year by the Department of Commerce and the US International Trade Commission.

However, the final determination may include further duties imposed on Chinese imports related to the companion “anti-dumping” investigation – the results of which are scheduled to be released on May 17. In addition, the Department of Commerce said that it had now changed the scope of its investigation to include PV modules manufactured outside China but including Chinese-made PV cells. 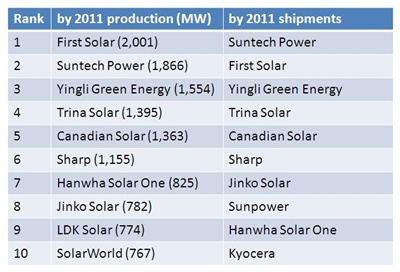 CASM reaction
The Coalition for American Solar Manufacturing (CASM), whose chief protagonist SolarWorld Industries America was the original petitioner for the ongoing investigation, said that the duties set to be imposed on its Chinese rivals was “in line with [the Department’s] findings in other countervailing duties cases involving China”.

Steve Ostrenga, the CEO of Helios Solar Works – recently revealed to be a founding member of the CASM after a period of anonymity – said of the preliminary determination:

The CASM blames a policy of subsidization in China for driving a number of failures among US-based solar companies, and says that at least 12 domestic producers have undertaken layoffs, gone bankrupt or closed plants across the country over the past two years as a direct result.

In reality, the picture is a more complex one, with some of those firms failing because of their inability to compete, or problems with scaling up their technology. Many of the Chinese producers also have far greater economies of scale than their US rivals, although the CASM contends that access to cheap capital in China is one of the reasons for that.

What is certainly true is that the price of PV modules based on crystalline silicon cells has fallen dramatically over the past year. NPD Solabruzz analysts estimate a drop of nearly 50% between Q4 of 2010 and Q4 of 2011, and while that is bringing the cost of solar electricity closer to grid parity and making it more genuinely competitive with fossil fuel sources, it is making a presence in the industry untenable for a large number of manufacturers without either government support or very deep pockets.

US PV market doubled in 2011 – as did China imports
PV installations also grew rapidly in the US last year, with an estimated 1.9 GW of solar capacity put into the ground or onto rooftops. That represents a year-on-year doubling, and Chinese exporters were able to take a large chunk of the available business:

The Department of Commerce, quoting figures from the US Bureau of Census, said that Chinese PV imports rose at a similar rate, from $1.5 billion in 2010 to $3.1 billion last year.

The CASM contends that this jump generated a trade deficit of $1.6 billion between the two countries in favor of China in 2011, from a much more balanced picture just a year earlier.

After the preliminary anti-dumping determination scheduled for May, the Department of Commerce is set to announce its final determination on the case on June 4, and after the USITC concludes its work in July, those tariffs could be imposed retroactively.

In its response to the preliminary determination, Yingli’s US-based subsidiary Yingli Green Energy Americas maintained that it was neither dumping PV modules in the US nor “unfairly subsidized”, adding that it “would continue to fight for affordable solar energy and further growth of the tens of thousands of US solar jobs that we help to create”.

"The important thing to remember is that tariffs are bad for the entire solar industry," said Liansheng Miao, chairman and CEO of the China-headquartered parent company. "We will continue to support the US as an important solar market, and believe that global trade and fair competition will persevere. Today's decision validates that.”

The US-based Solar Energy Industries Association (SEIA), which opposed the SolarWorld-led complaint because a large proportion of its members are PV installers and therefore benefit from lower-priced solar modules and panels, responded to the tariff announcement with a call for more global collaboration in the sector.

It feels that the announced duties would have little impact on the US market as things stand. Rhone Resch, the president and CEO of SEIA, said:

"SEIA is supportive of a rules-based process for resolving trade disputes in the solar industry and the Department of Commerce's investigation is certainly part of that process."

"It is important to note that this is a preliminary determination and the antidumping decision will be rendered in May. If the tariffs remain at these levels, we do not think that this will have a material impact on the US market."