Last year, IDEX Corporation made a big splash in the photonics industry with its $400 million buy-out of CVI Melles Griot, and is planning more acquisitions as it extends its reach into the sector. 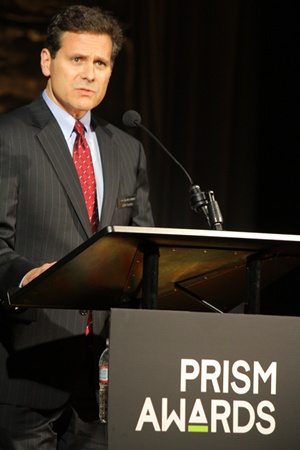 What led IDEX to enter the photonics industry?
IDEX is an aggregator of engineered-solution companies. The company’s roots lie in fluidic applications such as industrial-scale wastewater and sanitary water systems and, through acquisition, we expanded off of this base. Since going public in 1988, IDEX has made about 50 acquisitions, roughly two per year.

In the late 90s/early 2000s, we started to get involved in microfluidics as we experienced customer pull towards photonics and sensing in life-science applications. It was a natural market zig-zag for us to apply our fluidic expertise in microfluidic-enabled instrumentation.

Our first experimental foray into the photonics space was to acquire Semrock in November 2008 for $60million. At that time, Semrock was supplying its high-precision interference filters to many of the same life-science customers that IDEX was providing microfluidic instrumentation.

The subsequent integration of Semrock into IDEX gave us the confidence to continue our initial diversification into photonics. We then acquired ATFilms in January 2011 for $32million and closed the much larger acquisition of CVI Melles Griot (CVI MG) in May 2011 for $400million.

Why did IDEX acquire CVI Melles Griot in particular?
We have a detailed roadmap for optics and photonics, which includes potential mergers and acquisition candidates. CVI MG was owned by Norwest Equity Partners and was being put together with the purpose of being sold at some point in the future.

When this private equity owner approached IDEX, it was a clear signal that they were ready to talk about a transaction of this scale. We knew enough about CVI MG through their existing relationships with Semrock to enter deep discussions. It was a combination of timing and familiarity.

Can we expect to see IDEX move further into the photonics space through acquisitions?
Yes -- when we find the right fit. Our model is to achieve approximately 50% of our total growth through internal organic developments and the other half through acquisitions. We need acquisition candidates that fill the gaps in our current product portfolio. We are interested in doing more with the detection of light, integrated sub-systems, and engine-based solutions.

Like everyone else in optics and photonics, we are watching to see where the next major growth opportunity will come. Life science is definitely an important segment for us, although we see potential elsewhere.

Industrial and materials processing is important as we see rotation away from non-optical technologies towards laser-based solutions. We also believe there will be healthy growth for anyone providing advanced optics and photonics solutions in the environmental and remote sensing space.

What does IDEX bring to the photonics industry?
The operating model at IDEX is based on a combination of operational excellence and commercial excellence. In terms of operational excellence, we exploit a version of the Toyota production system called mixed-model lean manufacturing. This system is devoted to low-volume, high-mix products, which is the defining characteristic of the photonics industry. Bringing that kind of manufacturing expertise to a high-mix environment such as photonics is something that IDEX will do well.

On the commercial side, we strive to distinguish our small-to-medium sized business units from their competitors, whilst maintaining a sense of autonomy and innovation. As part of a large family, our business units have access to low-cost capital and shared best practices.

IDEX likes to engage with customers that have mission-critical requirements at the component and sub-system level. This is something we have done successfully for a number of years in both fluidic and microfluidic applications. There are similar dynamics in the photonics space where often small components are the critical enablers in the instrumentation. We expect the practices that IDEX has developed and served microfluidic customers well with will be equally applicable to photonics. 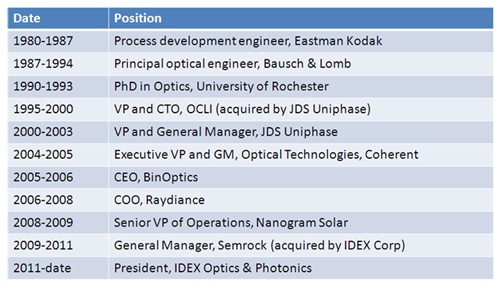 At Photonics West 2012, you said that “photonics is yet to have its silicon moment”. What did you mean by this?
This is a phrase that I learned from Barry Schuler, who, as well as being a visionary at AOL, was my boss during my time at Raydiance. Looking at the computer and information technology industry, we see that a complete ecosystem has developed as the result of a single breakthrough invention – the microprocessor.

So when I say that photonics has not yet had its silicon moment, I mean that no single invention has compelled and forced the formation of an ecosystem that has allowed for standardization and economies of scale. In the absence of this silicon moment, photonics remains a cottage industry comprising multiple highly customised non-standard solution sets that don’t fit together very well.

Although the photonics market is worth [well] in excess of $10 billion, none of the players have been able to compel a consolidation through a product or product set that causes customers to gravitate towards that architecture, the way the microprocessor did in computing.

We were seeing the beginnings of a silicon moment during the dot-com boom when the business was trying to move from discrete fiber-optic communication networking equipment toward a planar waveguide solution that would allow for massively parallel wavelength division multiplexing.

That said, it is important to remember that even in those boom years, the maximum annual production of the key enabler, the erbium doped fiber amplifier (EDFA), was 50,000 units per year. When we talk about high-volume standardized solution sets, we never quite achieved a silicon moment, not even in the glory days of fiber-optic communications. So we are still waiting, still searching.

What do you consider to be “high-volume manufacturing”?
The kind of ecosystems that I associate with silicon moments would have annual unit volumes of at least an order of magnitude larger than was seen with EDFAs. This would be 500,000 to 1,000,000 units per year, maybe more. That’s when you start to get the real economies of scale across the entire supply chain for a product set or product family.

Outside of data storage and DVD read-write heads, we really haven’t had that kind of dynamic in the optics and photonics space. It has been more about low-mix, high-volume solutions. That plays to the strength of several companies, including IDEX and the tools it has developed in non-photonic industries.

Ultimately, if we are going to drive the maturation of this industry, we need enabling solutions that will compel and standardise the general architecture of instrumentation in a way that will be embraced by not only us, but also our customers. However, customers have accepted the fragmentation of the existing cottage industry structure. It is going to take a compelling value proposition to change this.

Where could the photonics industry find such high-volume opportunities?
Much of the growth in the life sciences is driven by demographics. We have an ageing population and a baby-boom generation that is just about to retire. Despite the current economic turmoil, this generation has a lot of disposable income which it is willing to spend in pursuit of a better lifestyle.

A lot of what we are seeing in life science, such as DNA sequencing and personalised medicine, is largely driven by demographics. We have a time-delayed version of that with the modernization of China, its huge population, and the consequences of its one-child policy. Inevitably, the growth and accumulation of wealth amongst individuals in China will ensure that there is a similar move towards an improvement of health and quality of life in subsequent years and decades.

This long term mega-trend around life science and business opportunities for improved medical care are all bell-weather signals for optics and photonics.

You spent a long time at Kodak: what lessons can we learn from the demise of the company?
I was blessed to begin my career with a seven-year stint at Eastman Kodak Company, 32 years ago. The thing that I believe hindered them from doing what they needed to do in order to be successful was that they did not have good product-line management.

The extraction of new product ideas from R&D and taking them through pilot production and finally into high-volume manufacturing is a key success factor in any high-tech business. Kodak had a few obvious big winners, but they had a lot of missed opportunities, several related to optics and photonics.

This is what Kodak struggled with. They had a wonderful analogue photography business based upon silver-halide chemistry, but they had a hard time making this technology obsolete on their own terms, and were ultimately unable to do so.

Part of my time at Kodak was working with a great R&D team on buried channel CCD imagers. But the company’s leaders were unable to convince themselves and their investors to make the leap away from silver halide to digital imaging.

So, good product management is critical in any company. Effective product management starts from birth and proof-of-concept right through to maturation, retirement and obsolescence. This is a very important discipline for a company to master in order to survive over multiple business cycles.