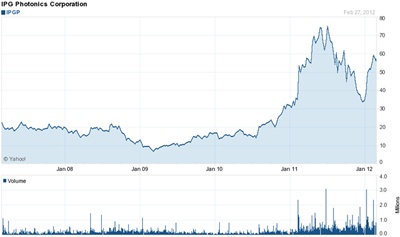 The fast-growing fiber laser vendor IPG Photonics is set to raise more than $160 million through a new public offering of its common stock.

The company has just announced plans to sell 2.8 million shares, along with 200,000 owned by its founder and CEO Valentin Gapontsev. The offering has not yet been firmly priced, but based on IPG’s closing stock price of $57.18 on February 27, the sale would raise gross proceeds of $160.1 million for the company, and $11.4 million for Gapontsev – not including the option to sell a further 450,000 shares if the sale is oversubscribed.

Underwriting the sale are BofA Merrill Lynch as the sole bookrunning manager for the offering, alongside Needham & Co and Stifel Nicolaus Weisel as co-managers. Merrill Lynch and the now-defunct Lehman Brothers were joint co-managers of IPG’s initial public offering (IPO) in late 2006, in which the company raised around $93 million.

The timing of the latest offering takes advantage of a recent sharp rise in the company’s stock valuation, which jumped from $35 in early January to $60 by mid-February after IPG reported that it had seen demand for lasers bounce back in the closing weeks of 2011. That figure is below the record $75 price reached in mid-2011, but still represents something of a historic high.

IPG says that it will use the proceeds to fund capital expenditures along with general corporate spending and working capital, and although the additional cash could also be used to fund acquisitions, IPG says that it has no immediate plans to do so.

Profit envy
The company has just enjoyed another record-breaking year in which it posted pre-tax income of $174.6 million after annual sales grew 59% to $474.5 million – demonstrating a profit margin that is the envy of the photonics industry. That added further to the company’s already healthy cash balance, which stood at $180.2 million (more than $205 million including short-term investments) as of December 31, 2011.

The proposed sale of stock would likely swell IPG’s coffers to upwards of $350 million, helping to fund a period of continued expansion, while also putting the company in an excellent position to make acquisitions.

IPG’s success has been largely built on its strategy of vertical integration – it produces all of the key components for its fiber lasers, including semiconductor diodes, active fibers, passive fibers and specialty optical components. In particular, through its investment in diode development and production using molecular beam epitaxy (MBE) at its headquarters in Oxford, Massachusetts, IPG has driven down the cost of its laser diodes significantly over the past few years, gaining it a significant price advantage over its rivals.

However, such has been IPG’s success with diodes that these components no longer account for such a high proportion of the overall fiber laser cost. As a result, IPG has been investing in its own production of other key components, such as power supplies and chillers, while also expanding its operations in Russia and Germany.

Although the company sees this additional vertical integration as a way of furthering its competitive advantage, not everybody agrees. In a recent research note, analyst Mark Douglass from Longbow Research expressed concerns that the company was perhaps putting too much emphasis on in-house production of non-optical components.

Assuming that the new stock offering goes ahead as planned, Gapontsev will see his holding in the company diluted, albeit only slightly. Through a combination of direct personal ownership and the two trusts that the CEO has created, he is expected to beneficially own approximately 35.4% of IPG’s common stock following the offering.

• In its prospectus accompanying news of the stock offering, IPG confirmed that despite the unanimous verdict of a jury in its favor at last year’s court battle over a patent owned by IMRA America, the final outcome of the trial is still not quite concluded. “IMRA America has filed post-trial motions seeking to set aside the jury verdict,” states the IPG prospectus. “IMRA America also has the right to appeal the verdict.”