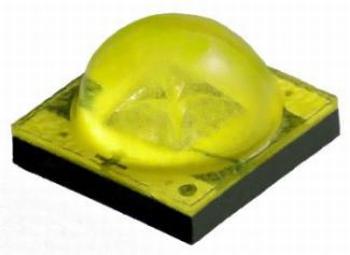 LED developer Cree has unveiled its XLamp XT-E white LED, which the company believes sets a new benchmark for performance.

According to Cree's figures, the XT-E more than doubles the lumens per watt of the existing XLamp XP-E LED family, providing up to 148 lm/W in cool white or up to 114 lm/W in warm white, both at 350 mA and 85°C. At 25°C it can deliver up to 162 lm/W. The company has stated that the XT-E features the highest performance and efficacy in the industry.

The XT-E and its stablemate, the recently released XT-B lamp, are based on a new version of Cree's established silicon carbide technology platform, one specifically intended to reduce the initial cost of LED lamps and hence tackle the single biggest barrier to rapid adoption of the technology.

Speaking to optics.org, Cree's Paul Scheidt said that the company's goal was to resist the temptation to sacrifice LED performance purely for a lower price tag, and instead leverage the company's expertise in silicon carbide-based LEDs to reduce total system costs. To that end, the company would not be moving away from its historical core technology of producing LEDs on silicon carbide.

"LEDs grown on silicon carbide will always be more efficient than those grown on alternatives such as sapphire wafers," he said. "The trade-off is that a higher-performance substrate is more expensive, but Cree manages that by being fully integrated and manufacturing its own wafers, rather than buying them from elsewhere."

Other developers are taking different paths, as the recent arrival of Soraa with its technology for growing the gallium nitride layers of a LED on a native GaN substrate, and the investment by the UK's Plessey in GaN-on-silicon fabrication, both plainly demonstrate.

"The pitch for GaN-on-silicon hinges on the fact that silicon wafers are cheap, and existing fully-depreciated equipment for handling older sizes of semiconductor wafers can now be used to make the LEDs," said Scheidt. "But there are two counterpoints to that argument. First, you will never get as efficient an LED grown on silicon as you will on silicon carbide, which means you will have to use more area of the chip in order to reach the same level of performance. And second, more processing steps have to be introduced. So while the wafer might be cheaper, the overall manufacture may not be."

Cost is also the fundamental Achilles' heel for the GaN-on-GaN approach, according to Scheidt, who commented that although the performance of GaN chips grown this way would indeed be high, the use of GaN wafers as substrates was "insanely expensive, and a huge cost differential compared to what everyone else is doing."

Tough times
Cree's announcement and Soraa's unveiling coincided with the Strategies in Light event, the annual trade show which this year balanced news of technological breakthroughs in solid-state lighting with reports of companies battered by harsh trading conditions.

"There is certainly considerable pressure on LED suppliers to get costs down in order to make widespread adoption happen faster," commented Scheidt. "That's just the day to day existence, and I know some suppliers have suffered. In any technology revolution there is always a transition period, as the focus moves away from the technology itself and onto the ways to enable it to actually work and be widely adopted. We are in the middle of that transition, and things can look a bit dreadful at that point. But we remain confident that LEDs will succeed and become a mainstream technology. It's just a matter of how quickly we can get there."