Regional sales were volatile in the fourth calendar quarter of 2011, with US down but other regions up. 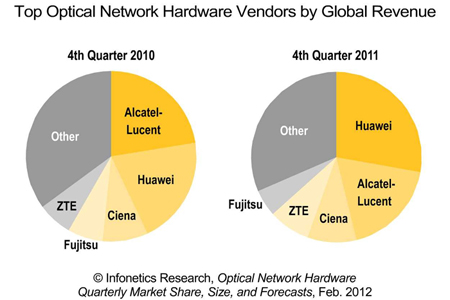 Optical networking sales up in Q4 2011

Spending on optical networking gear grew 8% globally in the fourth quarter of 2011 (4Q11) over the previous quarter, according to the latest Optical Network Hardware vendor market share report from Infonetics Research.

“Regional spending trends for optical network hardware were volatile in the final quarter of 2011, with North America down and the rest of the regions up sequentially, including a huge 63% gain in Latin America -- a region showing very positive long-term trends, ” commented Andrew Schmitt, directing analyst for optical for Infonetics Research.

“While the typical end-of-year budget flush failed to materialize in North America with AT&T and Verizon spending less, it did appear in full effect in EMEA, particularly Europe, up almost 11%. But the surge in Europe was due mainly to a surge in legacy SDH spending rather than of new WDM gear. Rising legacy spending is a negative leading indicator, as is the reversal in EMEA’s rolling four-quarter revenue, which turned negative in 4Q11 after only two quarters of gains.”

The global optical network equipment market, including WDM and SONET/SDH equipment, grew 8% sequentially in 4Q11, from $3.4 billion to $3.6 billion. For the full year 2011, overall optical network hardware sales were up 9%.

In the fourth quarter of 2011, the largest optical vendors benefitted most -- with the exception of Cisco -- including Huawei (up 35%), Alcatel-Lucent (up 20%), and Ciena (up 10%). Both Ciena and Infinera bucked the North America down-trend with positive quarterly optical revenue.

In 2011 as a whole, WDM optical spending grew 22% while SONET/SDH spending shrank 6%, as carriers continued to abandon investments in legacy technology in favor of ROADMs, coherent optics, packet-optical transport, and optical transport network (OTN) equipment. ROADM spending is on a 7-quarter streak of consecutive gains, with shipments up a stunning 36% in 2011 over 2010.