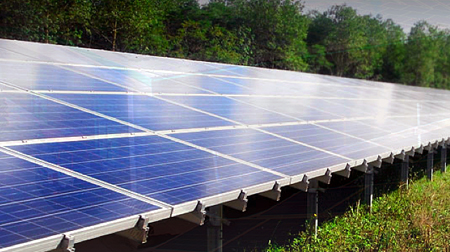 Mind4Energy, based in Ghent, Belgium, has launched a new photovoltaic monitoring system which analyzes the performance of solar power plants. The M4E Powermonitor, developed in collaboration with Ghent University, made its industry debut at the Intersolution PV Show in January 2012 in Ghent, Belgium.

The Powermonitor has been developed by a team of photovoltaic experts led by Dirk Eeraerts of Mind4Energy and Jeroen De Maeyer at the University of Ghent as a service tool. It allows quick visualization and comparison of key performance indicators of solar power plants.

“The goal of this system is to make photvoltaic plant operation and performance follow-up easy and efficient, while maximizing the facility’s output,” Dirk Eeraerts told optics.org. “As such, the owners of solar power plants can guarantee or improve their return on investment, which is an important capability in the context of decreasing green certificates and increasing electricity prices.”

Mind4Energy was set up by four engineers who had the joint idea of delivering reliable and high quality services within the renewable energy sector. Experienced in photovoltaic and monitoring systems Eduardo Diaz, Thomas Van Damme, Mathieu Vandenbulcke and Dirk Eeraerts decided to join forces “in order to meet one of the most important challenges we have as a society: ensuring a reliable and sustainable energy supply,” Eeraerts explained.

The company specializes in design and construction supervision of large ground-mounted photovoltaic projects and has experience with a wide variety of structures and sub soil types including landfills, as well as practical experience of the different building and operational standards in various countries and the different international electrical and photovoltaic regulations.

The Powermonitor consists of a secure web-based interface. Its main features and functions include measurement of yield, power and voltage; identifying and indicating faults and warnings; delivering performance reports and service logs; benchmarking based on independent meteo-data.

It is also adaptable to different market loggers and inverters and provides a library for storage of project details including datasheets, manuals and “as-built” files. The system offers sub-logins, with the ability to aggregate projects by region or by investor/owner. The Powermonitor offers of a fully hosted, secure, web-based interface with a user friendly interface and automatic reporting functionalities. Other special features can be incorporated according to client request.

Mind4Energy combined its expertise in photovoltaics and data communication with the expertise of University of Ghent-Power-Link’s expertise in software development, data gathering and monitoring to come to this effective and reliable tool for the PVindustry.

Project spokesman Dirk Eeraerts is an Industrial Engineer with an MBA from Coles College of Business, Atlanta. Passionate about clean technologies, he has previous experience of starting up and managing satellite photovoltaic and environmental technology companies in the USA, Singapore and Europe. Dirk has himself led the development and financing of several large photovoltaic installations (including ground, rooftop and BIPV).

He added, “It is important that we produce responsible energy. This will result in a better environment and will reduce our dependency on imported fossil fuels or foreign-owned nuclear power. Solar PV is the ideal technology for decentralized energy production and it is an important part of the responsible energy mix of the future. This type of power allows both private citizens and businesses to generate some of their own power and reduces the grip of the big electricity companies. It's great that we at Mind4Energy can contribute to this development."