PW 2012: A snapshot of the imaging sector

The exhibition at Photonics West 2012 provided a good opportunity to catch up on the latest innovations in imaging technologies. Here, optics.org presents some highlights.

From InGaAs chip developments to higher frame sampling rates to ever more compact integrated and ruggedized cameras, the imaging industry seems to be on a roll, judging by the new systems on show in San Francisco. One notable trend is the growth in demand – and supply – for camera systems operating at ever shorter infrared wavelengths, where there are a wealth of industrial, scientific, medical and defense applications. 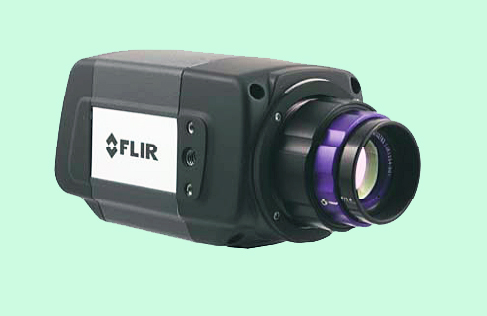 Flir Systems announced the launch of its new SC2600 near infrared (NIR) camera for the research and science community. With its low noise and highly sensitive 640x512 InGaAs sensor, the SC2600 NIR camera complements Flir's range of imaging products for automation, research, and science applications. This camera combines a spectral sensitivity range of 0.9 to 1.7µm and small 25µm pixels, providing great image detail and small spot size for the detection of small targets and making accurate measurements.

Ross Overstreet, Flir’s Scientific Segment Engineer told optics.org, “The 2600 is the smallest 645 format camera that we have developed. And at around $35,000, it has an attractive price point. There are many telecoms and life science applications as well as military apps for SWIR, such a laser designators (target identifiers). We want to be a complete systems provider; our goal is to have a science grade product in that market. This camera was not solely designed for military applications."

He added, "The near infrared wavelengths pass through silicon so these frequencies have valuable applications in wafer alignment. They can also be useful in penetrating poor atmospheric conditions such as fog and smoke, and it also has potential in the solar cell manufacturing industry; notably reverse testing, when you put a voltage through a solar cell and see the reverse emission spectrum testing; another interesting market is in the art world for forgery detection."

The “J-Series” short wave infrared camera features 1280 x 1024 pixels, with 15µm pitch and 60Hz full frame rate. With a compact volume below 4.3 cubic in and weighing less than 125g, this camera easily fits into most unmanned aerial or ground vehicle systems, hand-held, and mobile surveillance systems. It is also available in an OEM model for integration into higher level systems.

The uncooled SWIR camera is available in two versions: one operates in the shortwave infrared from 0.9 to 1.7µm spectral range; the other offers extended NIR-SWIR range from 0.7 to 1.7µm. The cameras, which have no mechanical shutters, can also image through fog, smoke, haze, or dusty conditions.

From low light to daylight, the ruggedized, solid-state SWIR cameras are ideal for persistent surveillance and other military, aerospace, and marine operations. Both OEM camera models integrate easily into existing gimbaled or handheld imaging systems, enabling visual verification of laser location and imaging during thermal crossover – the hours of sunrise and sunset – when the performance of traditional thermal imaging systems is degraded.

Dr. John Trezza, VP Force Protection, at Goodrich's ISR Systems’ Princeton-based team, said, “This camera will revolutionize the SWIR imaging market with its combination of specifications. Combined with Goodrich InGaAs detectors, which offer the lowest dark current in the industry, this camera opens up many new applications where high resolution and sensitivity in the SWIR are critical.”

BAE Systems Imaging Solutions introduced its first high-definition Scientific “s”CMOS image sensor, the Fairchild Imaging CIS1021. As a high definition camera component designed for collecting images through a microscope or other imaging system, the sensor chip is specified to aid scientists researching single molecules in the laboratory right through to analyzing stars in the far reaches of space by simultaneously providing high sensitivity, dynamic range and speed all at high-definition television resolution.

Unlike competing sensors, BAE Systems claims, the CIS1021 combines these multiple capabilities into a single sensor and allows scientists to capture all the data in a scene, from the faintest to the brightest target in an image. The speed, dynamic range and sensitivity make the sensor ideal for life science applications including live cell microscopy, drug discovery and real-time polymerase chain reaction (RT-PCR), as well as physical science applications such as astronomy.

When examining living cells or DNA samples, the CIS1021’s high dynamic range allows scientists to collect both weak and strong signals from the sample in the same image. This provides greater detail from bright or dim areas and captures data without damaging the sample. When used in applications such as cell biology and drug discovery, scientists can more efficiently detect or identify ways to prevent or treat medical conditions, for example.

In the field of astronomy, sCMOS technology and the CIS1021 sensor can be useful in the scientific application known as “lucky imaging,” for instance, where higher resolution can reduce the blurring effects of atmospheric turbulence when taking images of planets and stars through the earth’s atmosphere. 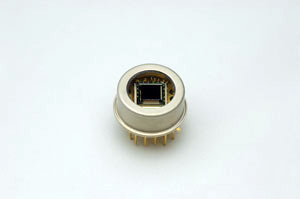 Mark Christenson, manager, business development Imaging solutions, at BAE Systems, told optics.org, “The key issue we hear from our customers is their need for low noise in imaging sensors. Our sensors offer a lot of anti-blooming features. Another key development in the market is growing demand for higher frame rates, well above 10 frames per second; with out latest camera sensors we can offer up to 60 fps or even 100 fps.”

Generally the BAE Systems Imaging Solutions products (the former Fairchild ranges) are supplied to the scientific markets including scientific research, medicine, industry and defense. Christenson added, “A key area of R&D for this technology is to further refine and develop sensors that can cope with the transition in light conditions between daytime and night-time; our focus on low noise and high frame rate is extending the range of operation in this area of interest.”

At PW 2012, Hamamatsu Photonics introduced its new G11097-0606S InGaAs image sensor, which features an array of 64x64 pixels each measuring 50x50µm. This economical image sensor is suitable for most NIR imaging applications up to 1700nm that are currently employing more expensive, higher density image sensors. Such applications include thermal imaging, laser beam profiling, and NIR inspection. 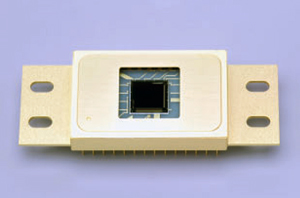 The G11097-0606S has a compact TO-8 package that contains the image sensor and a one-stage TE cooler. The image sensor has a hybrid structure consisting of a back-illuminated InGaAs photodiode array bump-bonded to a CMOS readout circuit. Its spectral response range is from 950 to 1700nm, with peak sensitivity at 1550nm. Typical photosensitivity is 0.8 A/W at 1550nm, and the conversion efficiency is 1600 nV/e-. The G11097-0606S is also easy to operate: it has a built-in timing generator and requires a master clock pulse and master start pulse only.

Hamamatsu was also demonstrating yet another InGaAs area image sensor – the G11097-0707S – with a 128x128 pixel array designed for two-dimensional infrared imaging. This sensor has a hybrid structure consisting of a CMOS readout circuit and back-illuminated InGaAs photodiodes. Each pixel is made up of an InGaAs photodiode and an ROIC electronically connected by an indium bump.