Soraa gets vertical with halogen replacement 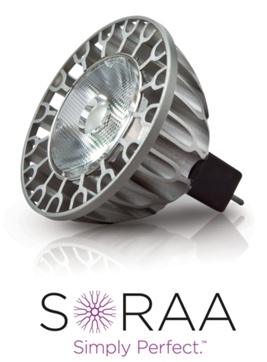 Soraa, the University of California, Santa Barbara (UCSB) spin-out, has emerged from “stealth mode” with the launch of a drop-in LED-based replacement for 50 W MR16 halogen lamps that promises to pay for itself in reduced energy consumption within one year.

Using technology developed by the blue LED pioneer Shuji Nakamura and his UCSB colleagues, and now led by the highly-regarded ex-Intel and Samsung executive Eric Kim, Soraa has coined the term “LED 2.0” to describe its approach to solid-state lighting.

That’s because instead of growing the light-emitting gallium nitride layers of the LEDs on top of a sapphire, silicon carbide or silicon wafer – as is done conventionally – Soraa employs a native host, in the form of a gallium nitride substrate.

According to CEO Kim, who presented the company’s new lamps in a keynote talk at the Strategies in Light conference in Santa Clara this week, this means that the LED structures are “perfect” – with 1000 times fewer dislocations than rival LEDs that use conventional substrate materials prone to lattice mismatch.

Kim added that, while 2011 represented something of a breakthrough year for LED lighting, the cost of the technology still needs to be brought down by more than an order of magnitude. “Today’s LED products provide 25-50x less lumens per dollar than incandescent lamps, and 15-30x less than compact fluorescent lamps,” he told delegates.

Material challenges
While others are looking to manufacture the chips on larger-area sapphire or silicon substrates to increase that key lumens-per-dollar metric, Kim is adamant that such dramatic improvements to performance can only result from dramatic technical advances.

That is what Soraa believes that it has achieved, through the incorporation of GaN substrates produced using “ammonothermal” chemistry: a technique championed by Jim Speck, one of the start-up’s co-founders.

Although the potential advantages of GaN substrates have long been recognized, the material has proved to be an incredibly difficult one to manufacture in the kinds of size and quality necessary for reliable, reproducible volume production. Until now, it seems.

Armed with more than $100 million in venture capital, provided largely by Khosla Ventures, cleantech specialist NGEN Partners and New Enterprise Associates, Soraa now has a GaN substrate fab in Fremont, California, and is ready to ramp production of the lamps through the second calendar quarter of 2012.

The company told optics.org that it was in advanced discussions with commercial partners, and that it would begin shipping its first MR16s by the end of March. With much of the focus of the solid-state lighting market now centered on cost, the key questions center on how much it will cost to produce the GaN-on-GaN LEDs, and the price at which they can be sold profitably.

Size isn’t everything
While optics.org understands that $25 is an accurate estimate of the initial pricing of the MR16 replacement, it appears that the company’s pricing model will be flexible one, depending on the specific nature of the application. “Soraa will be working with commercial customers to price for under one year payback, based on 12 hour per day operation,” said the company.

Regards the higher cost of the GaN substrates, Soraa added: “GaN substrates are more expensive than sapphire and silicon carbide, but substrates in general represent a small fraction of the total cost of LED based lamps.”

The radical approach may take some time to catch up with the kinds of wafer sizes now being employed by the largest HB-LED manufacturers (companies like Osram, Samsung, Cree and Philips Lumileds are all in the process of migrating to 6-inch production on sapphire or SiC), but Soraa points out that size isn’t everything, and that another metric is actually rather more important:

“While we do not see any fundamental reasons why GaN substrates will not move to the same size as other substrate technologies (with work on this underway), it is important to remember that the lumens per wafer is a much more relevant metric than the raw size of the wafer,” the company said.

Haitz’s law
This is a point that Kim expanded on in his recent keynote, noting that Haitz’s law – the analog to Moore’s law in silicon semiconductors, and which has seen the lumens emitted per LED chip increase dramatically over the past decade – has become reliant on the use of multi-die packages more recently.

There are other important benefits too. A more efficient emitter means less heat to deal with, and that eases packaging and heat-sinking constraints: Soraa says that its 50 W MR16 replacement needs no mechanical fan, is compatible with low-cost silicon packaging and is an exact drop-in replacement for the halogens (other LED replacements that have had more excess heat to deal with have tended to be slightly larger). Lighting quality is also improved, because fewer emitters are needed and therefore optical design is simplified.

For Nakamura, that lack of compromise is a key attribute. In a statement accompanying the launch of the technology, he said:

“Lighting affects the way we see the world, and good light can make anything more compelling. At Soraa, we are proud to create efficient lighting products that do not compromise on performance, offer the highest quality available and greatly reduce energy waste. We believe that with GaN on GaN, we have truly entered the next chapter in LED technology: LED 2.0.”

• Though now officially out of "stealth mode", Soraa has already made a mark with its development of high-power blue and direct-emitting green laser diodes, as reported previously by optics.org.