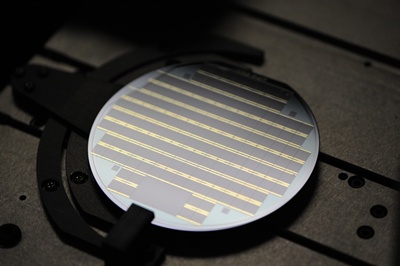 IQE, the UK-headquartered epiwafer foundry, is to take a 9% equity stake in Solar Junction (SJC), the company that currently holds the record for the world’s most efficient solar cell.

The $5 million equity agreement and a closely related investment in manufacturing equipment to produce the cells in volume and under an exclusive supply deal is being funded through a £10.5 million share issue through the London Stock Exchange.

On February 8, IQE placed nearly 44 million new ordinary shares at 24 pence each with new and existing shareholders. IQE’s CEO Drew Nelson commented: “We are delighted that both existing and new institutional shareholders have supported the fundraising, which will allow us to significantly accelerate our well-established CPV strategy.”

"Our investment in Solar Junction, with its world-beating CPV cell technology, is an outstanding opportunity for us to become a key supplier of epiwafer and materials to the CPV market. The investment also brings us access to Solar Junction's well-funded R&D."

MBE tools for dilute nitrides
California-based SJC specializes in multi-junction cells that are used in concentrating photovoltaic (CPV) modules – a part of the solar business that has seen substantial investment over the past couple of years, with a number of utility-scale CPV facilities now under construction.

The firm’s world-record 43.5% efficiency cell uses a compound semiconductor layer known as a dilute nitride to convert more of the solar spectrum into electricity than current commercial cells, based on technology initially developed by a research team at Stanford University. Depositing such layers is tricky, but a key advantage is that the cells can be produced on GaAs wafers rather than germanium.

IQE already produces thousands of GaAs wafers every year for manufacturers of radio frequency chips that are used extensively in mobile devices, and has more recently developed expertise in structures suitable for CPV cells.

The £10.5 million raised by IQE will also fund an $8 million purchase of volume production molecular beam epitaxy (MBE) tools that will be dedicated to manufacturing epiwafers for SJC’s cells.

SJC announced just last week that it had secured a “multi-megawatt” supply agreement with the CPV module maker Semprius – a University of Illinois spin-out in which the German industrial giant Siemens took a 16% stake last summer.

Semprius and SJC have been collaborating for the past couple of years, culminating in the demonstration of a record-breaking 33.9% efficiency CPV module in January. Semprius is currently establishing a 5 MW capacity CPV module plant in Henderson, North Carolina, with production start-up slated for August 2012.

Competitive landscape
“This is a potentially transformational opportunity [for IQE],” added Nelson. “It provides us with an outstanding opportunity to become a key epi supplier to the CPV market. This market has reached an inflection point in terms of cost comparisons with fossil fuels and is promising impressive growth potential.”

While the CPV market is at a very early stage of development, its potential for low-cost electricity generation in parts of the world that enjoy high solar irradiation and clear blue skies does now appear to have been recognized – even if there remains a more skeptical school of thought that the approach is too expensive and complex to compete with standard photovoltaics.

Predictions from analysts at Greentech Media and Strategy Analytics suggest that CPV could command a market of 1.5 GW by 2015, which IQE believes would translate to a corresponding epiwafer opportunity worth some $250 million.

At the moment, the supply of multi-junction cells for CPV is dominated by three vertically integrated manufacturers who produce both epiwafers and the cells – led by the Boeing subsidiary Spectrolab, along with US-based Emcore and Germany’s Azur Space Solar Power.

But a whole host of potential competitors has emerged in the past couple of years, ranging from start-ups like SJC and Canada's Cyrium, to much more established chip producers like JDSU, the Taiwanese LED specialist Epistar, and RFMD - one of the leading suppliers of GaAs-based RF chips to handset makers and a major exponent of volume MBE production.

IQE’s investment in SJC is part of a wider $20 million funding round being put in place by the cell company. In return, IQE is gaining an exclusive seven-year epiwafer supply contract and exclusive rights to supply all of SJC’s products.

The UK firm said that following completion of the investment – expected this month – it will begin transferring the SJC process and MBE tool installation. Qualification of the tools is expected before the end of the year, with the sale of wafers for CPV cells set to begin in 2013.