This 5.4 megapixel microdisplay gives SXGA resolution in full color but for half the power. 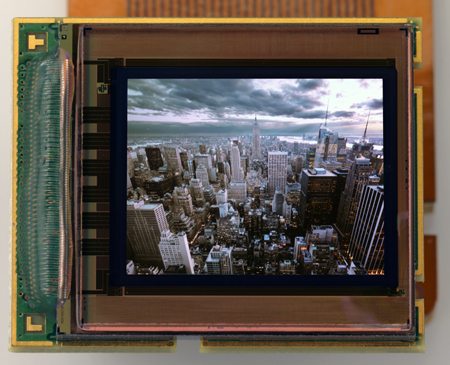 The compact display, which has a sub-pixel pitch of 4.7x4.7μm, which MicroLED claims is the highest pixel density OLED microdisplay available. “By doubling the pixel density of comparable products, we have eliminated the gap between pixels,” said Eric Marcellin-Dibon, CEO of MicroOLED.

“With no black matrix present, the resulting image resolution is of the highest quality, which makes this display most suitable for defense, medical and professional camera applications that demand sharp images with very smooth transitional tones.”

High contrast (maximum 100,000:1) and high uniformity (96 per cent) also play key roles in picture quality. Depending on how one drives the OLED microdisplay, it can perform using as low as 0.2W, half the power consumption of other products in its category. MicroOLED achieves this low level power consumption even when the fully digital video input is embedded.

Marcellin-Dibon added, “We are really excited by the market potential of our new OLED microdisplay, which we believe to be superior in picture quality to any product in its category. The current trend of replacing electronics with optics components fits well with MicroOLED’s ability to produce this exceptional picture quality in miniature format. We see many opportunities opening up in existing applications and new markets as a result.”

The company will market the new microdisplay to three key market sectors: head-mounted displays used by surgeons; professional camera and camcorder manufacturers; and night vision applications, where heightened contrast and uniformity enable defense and security professionals to improve the performance of detection and identification equipment.

The microdisplay offers 16 million colors, SXGA or monochrome formats (2560 x 2048 pixels); both with digital video inputs. It also meets the standard environmental operating requirements for military applications. The new product builds on MicroOLED’s exclusive OLED patent technology that is recognized for its ability to eliminate defects common in other microdisplays, such as color non-uniformity or fixed pattern noise.

Founded in 2007, MicroOLED is a privately held company with headquarters, R&D and a new 300,000-unit production facility in Grenoble, France. The company is led by a management team with several years’ R&D experience in OLED technology from CEA-LETI, a leading European micro-and nanotechnology research center.