Researchers say prototype could be used in medicine, or lead to adaptable “in-eye” sunglasses. 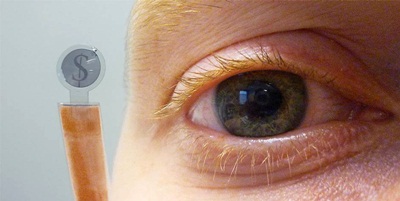 Contact lenses that can also act as adaptable sunglasses could be the result of an ongoing collaboration between Ghent University and the electronics development hub IMEC.

A research team from the two institutions has developed a prototype curved LCD display that can be embedded into a contact lens to form a pixelated image on its surface – in this first instance, the image is a dollar sign.

The display is not intended for the wearer of the lens to view – the human eye would be unable to focus on such a close-up object – and it would only be seen by others. But Jelle De Smet and colleagues believe that the effect could be used in future medical, cosmetic or entertainment applications.

For example, it could be used to control the amount of light that passes through the eye, thus aiding people with damaged retinas, or acting like “in-eye”, adaptive sunglasses. A color version of the technology could also be used to change the appearance of the iris.

“Normally, flexible displays using liquid crystal cells are not designed to be formed into a new shape, especially not a spherical one. Thus, the main challenge was to create a very thin, spherically curved substrate with active layers that could withstand the extreme molding processes,” said De Smet, the lead researcher.

“We had to use very thin polymer films, and their influence on the smoothness of the display had to be studied in detail. By using new kinds of conductive polymers and integrating them into a smooth spherical cell, we were able to fabricate a new LCD-based contact lens display.”

Adaptable sunglasses
The Belgian team is not the first to come up with a contact lens display prototype, but previous versions have tended to be based on LEDs, where the display resolution would be limited to only a small number of pixels. In contrast, the LCD-based technology permits the use of the entire display surface.

“By adapting the patterning process of the conductive layer, this technology enables applications with a broad range of pixel number and sizes, such as a one-pixel, fully covered contact lens acting as adaptable sunglasses, or a highly pixelated contact lens display,” they say.

Though the current device represents only a very early-stage working prototype, the team believes that real applications could be possible in only a few years. One key challenge will be to figure out how to power the device – at the moment, the prototype version uses a 5 V connection via a wire, but only needs a tiny current to function as it behaves like a capacitor.

Ultimately, the display would need to be powered autonomously, and the researchers say that they could adopt the same technology demonstrated by Babak Parviz, who has developed similar prototypes based on LEDs (and related to Google’s so-called “Project Glass” project) at the University of Washington in the US.

“This would imply the use of electromagnetic induction,” the researchers told optics.org. “However, for a more comfortable use, integration of flexible solar cells and microbatteries would be the likely way to go.”