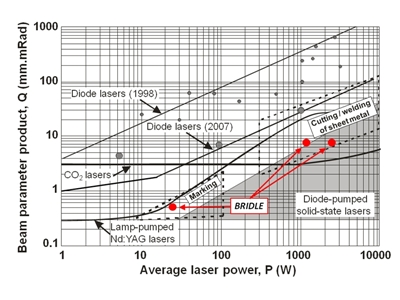 Work has started on a new €4.3 million project to improve the brilliance of laser diode bars and develop a direct-diode technology suitable for metal welding and cutting.

Led by Germany-based DILAS Diodenlaser and co-ordinated by Thomas Brand from the company, the “BRIDLE” project (short for “BRilliant Industrial Diode LasEr”) officially started up in September and will run for three years.

The European Commission is providing €3.1 million in funding towards the project under its FP7 Information and Communication Technologies (ICT) research theme.

DILAS is joined by six other partners in the consortium: researchers from the UK’s University of Nottingham, the Fraunhofer Institute for Laser Technology and Ferdinand Braun Institute in Germany, France’s Laboratoire Charles Fabry, plus industrial partners at the Finnish diode laser firm Modulight and Swiss company Bystronic, which sells laser cutting systems.

They are aiming to develop a source of more than 2 kW delivered via a 100 µm fiber with a numerical aperture of less than 0.15, and with a power conversion efficiency in excess of 40%. 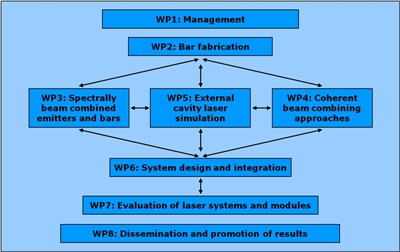 Brilliant bars
The novel diode-laser mini-bars developed are expected to have a brilliance three times higher than what is commercially available currently with broad emitters, using both dense and coarse spectral multiplexing to scale power. Wavelengths will be multiplexed using either volume gratings, reflective gratings or dichroic mirrors.

According to the BRIDLE project web site, the initial target is to make bars emitting 7 W of optical power with a beam parameter product of 0.8-1.5 mmmrad.

Spectral multiplexing and coherent beam-combining to phase-couple diode bars so that they produce a near-diffraction-limited output will further improve that brilliance figure by a significant magnitude.

“During the project, a sequence of increasingly brilliant demonstrators will be developed, each targeting a specific industrial application,” noted DILAS. “Manufacturability and cost down-scaling issues [will] also [be] addressed by integrating micro-optical beam shaping and beam combination into the production process.”

State-of-the-art simulation tools will be used to optimize designs for laser bars and systems, while the integration of optics inside the mini-bars should deliver efficient structures with extremely low vertical divergence.

That effort will include what the partners describe as the first system-level design tool for high-power diode laser sources, one which will "bi-directionally couple the simulation of the laser array with optical design software".

The project is scheduled for completion in August 2015. For further details, visit the project web site.