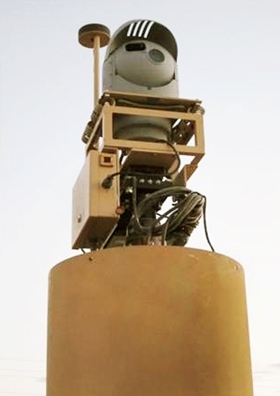 The US Army claims that its engineers have developed a photonics-based system capable of providing advanced warning of potential threats such as roadside bombs on poor-quality roads.

Known as the Shadow Class Infrared Spectral Sensor-Ground, or “SCISSOR-G” for short, the turret-mounted system has already been used by soldiers during a 90-day test period.

According to Jim Hilger, chief of the Signal and Image Processing Branch within the US Army’s Communications-Electronics Research, Development and Engineering Center (CERDEC) division, the system could give soldiers who are working to clear routes during missions a greater stand-off range.

"If you can increase the threat detection in front of the vehicle, you give the operators a chance to do what they need to do to further interrogate it," Hilger is quoted as saying in the US Army’s release. "You can see [the threat] before you get to it."

"We are giving the route clearance patrol the ability to look for cues and clues while they're on the move," he added. "They're generating the information live. They're not waiting for an intelligence brief to give them photographs or a data feed from an [unmanned aerial vehicle]."

Threat detection in real time
SCISSOR-G is seen as complementary to standard radar, but capable of picking up on threats at greater distances. Those threats can then be further interrogated by radar as the vehicle approaches them.

The system comprises a sensor and a multi-sensor graphical user interface, and has been mounted on the US Army’s “Husky” vehicle. A 10-inch turret on top of the Husky features both infrared and high-definition color cameras, controlled from inside the vehicle and able to monitor the roadway for threats in real time. The system can also be configured for two vehicles, with commands and data transmitted via a radio link.

To develop the infrared system, CERDEC’s Night Vision and Electronic Sensors Directorate (NVESD) took an existing sensor designed for aerial detection and adapt it for use on a ground vehicle. 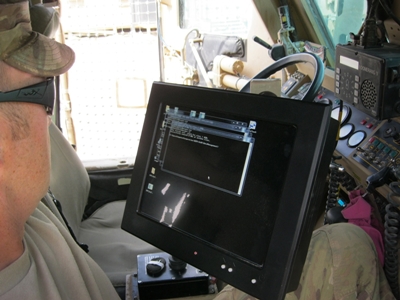 Threat signature
According to the US Army, the detection of an irregularity on the road ahead does not necessarily mean that a threat is present – meaning that it is still up to the operator to determine whether further investigation is needed, based on the so-called “threat signature” of the object detected.

While the US Army has been working to develop such a system for the past decade, a similar project at Belgium’s Royal Military Academy in Brussels has focused on aiding decision-making by troops with a low-cost, multi-sensor system, also designed to be mounted on armored vehicles.

The “SUM” project features radar, optical detection and an off-the-shelf infrared camera, using a data fusion “engine” to warn of distant hazards in a vehicle being driven at normal cruising speeds, enabling a driver to slow down before a more detailed analysis of the potential threat can be carried out as it is approached.