UK-headquartered subsidiary of GSI Group also has plans to launch a 6 kW version next year. 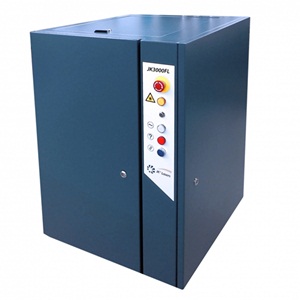 Industrial laser specialist JK Lasers, part of the GSI group of companies, has added to its growing suite of fiber lasers with a new 3 kW product that is designed to enhance manufacturing productivity by processing thicker-section metals at faster speeds and to higher standards.

The company now offers fiber lasers spanning the power range from 50 W to 3 kW, but that upper limit is set to increase again next year, with JK aiming to introduce either a 5 kW or 6 kW version.

JK is one of a number of companies, including Rofin-Sinar, Coherent, JDSU and Jenoptik among others, who are trying to make inroads into a market still overwhelmingly dominated by IPG Photonics with its “YLS” series of high-power fiber lasers.

Parent company GSI Group has identified fiber lasers as one of three key strategic areas of interest, and has previously said that Chinese customers had been urging JK to accelerate the development of higher-power sources.

Automotive applications
IPG’s high-power sources are already being used widely in automotive production, and JK is hoping that the launch of its 3 kW laser will help to open up new applications in this area, particularly in remote laser welding.

Mark Greenwood, JK’s managing director, told optics.org: “JK Lasers quadrupled its fiber laser output this year, with sales driven by the launch of our new 1 kW (JK1000FL) and 2 kW (JK2000FL) fiber lasers. These have helped us make significant inroads into applications such as sheet-metal cutting, which have previously been dominated by less efficient CO2 and Nd:YAG lasers.”

“The mechatronics division of Japanese systems integrator Sumitomo Heavy Industries has recently trialled the JK1000FL on behalf of its automotive customers,” Greenwood added. “The results have been promising, revealing that the JK1000FL produces the necessary high speed and high-quality welds for a range of industrial applications, such as the manufacture of diesel injectors and airbag initiators."

UK-based JK says that the new laser features a consistent spot size and beam profile over the full power range, and it is also fitted with the firm’s detachable “plug in, pre-aligned” beam delivery fibers. They are offered in core diameters from 100 µm upwards to provide versatility in processing difficult-to-access areas.

The company adds that other benefits include a patented system for protection from back-reflections, designed to be used when processing highly reflective materials such as aluminum, copper, brass and gold.

Fiber laser traction in cutting systems
At last month’s Fabtech 2012 event held in Las Vegas, a larger number of metalworking OEMs than ever showed off systems based around fiber lasers. According to Longbow Research analyst Mark Douglass, all of the major cutting systems companies – including Amada, Trumpf, Bystronic, Mazak and Mitsubishi - demonstrated a tool based on either a fiber laser or, in Trumpf’s case, one of its own disk lasers.

IPG’s lasers feature exclusively in systems from Mazak and Mitsubishi, with the latter’s 2.5 kW system seen as a particularly significant design win for IPG. Douglass says that Bystronic is using both IPG and Rofin-Sinar lasers in its systems, while Amada has a long-standing relationship with JDSU.

“IPG continues to dominate the landscape as it takes advantage of its first-mover status and favorable pricing, and it picked up an important win with Mitsubishi,” wrote Douglass in a research note following the event. “OEMs with lasers other than IPG, aside from Amada and Trumpf, were few and far between.”

However, with the adoption of high-power fiber lasers for cutting systems still seen to be at a relatively early stage, potential challengers to IPG - such as JK Lasers - believe that there remains an opportunity to take some significant market share as the technology makes further gains against traditional sources.