Leading PV company aims to accelerate shift to unsubsidized markets by increasing the conversion efficiency of its modules. 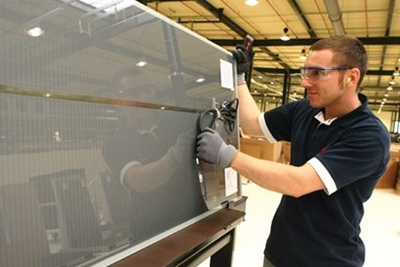 An improved laser scribing process is one of several enhancements to module conversion efficiency being made by First Solar, one of the world’s leading photovoltaics (PV) companies.

The Tempe, Arizona, maker of thin-film CdTe PV products has recently switched its strategic focus away from traditional subsidized markets, aiming instead to deliver solar electricity at prices that can compete directly with traditional energy sources without the reliance on government hand-outs.

In doing that, the biggest “lever” for reducing costs is to increase the conversion efficiency of the modules it sells. First Solar’s CEO Jim Hughes told an investor call to discuss the company’s Q3 fiscal year 2012 results that the company had already begun rolling out a new laser scribing process as the first step towards accelerating efficiency improvements.

Earlier this year, Hughes said that in order to hit First Solar’s long-term model of delivering electricity at a cost of less than $140 per megawatt hour, the CdTe modules would need to operate at a typical efficiency of 15% by 2016.

While First Solar’s laboratory experiments have shown that a “hero” conversion efficiency of more than 17% can be achieved with a small cell, doing that on a volume production line with full-size cells and modules is an entirely different matter. In the current quarter, the average efficiency of the modules First Solar made was around 12.6%, indicating the significant improvement that is needed.

As one of the first steps towards achieving that, the updated laser scribing process – which reduces active-area losses in the module - should be in place across all of the company’s production lines by the middle of 2013.

Other measures outlined by Hughes include refined semiconductor material deposition, which should also be completed by the middle of next year. But the most significant improvement to efficiency should be provided by an updated back contact for modules, something that should be in volume production in the second half of 2014.

Sandy hits construction sites
The shrinking subsidies on offer and tough competition caused by plummeting prices of rival crystalline silicon PV modules could be clearly seen in First Solar’s Q3 results, with sales of $839 million down nearly 17% on the figure posted in the third quarter of 2011.

However, sharp cuts in operating expenses – the company said earlier this year that it would eliminate 2000 jobs and close its manufacturing facility in Frankfurt – meant that Hughes was able to report a pre-tax profit of $110.8 million for the period.

The CEO highlighted some of the early progress being made in its new target markets. That includes the company’s first major project in the Middle East – a 13 MW deployment near Dubai – and two deals in the Rajasthan region of India totaling 75 MW. While encouraging, the scale of those deployments remains very small in comparison to the 3 GW "pipeline" of subsidized projects that should be completed over the next couple of years. 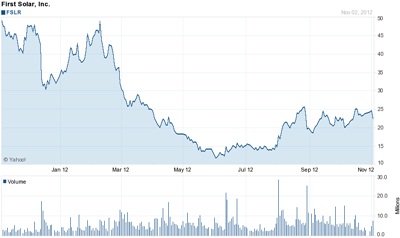 Hughes also noted that the destruction caused by ex-Hurricane Sandy had been felt across some of First Solar’s PV construction sites – including one in Maryland and three in Canada. With local suppliers also affected, and an expectation that key workers such as electricians may be commandeered into repairing damaged infrastructure, those projects are now likely to be delayed.

As a result, sales revenues from their completion will in all likelihood be shunted back into next year, and the company trimmed its revenue guidance for 2012 by $100 million as a result.

That news knocked around 7% off the value of First Solar’s stock, although over the six months since announcing its restructuring plans, the company’s share price has recovered impressively, rising from a low of $11.77 in June to just over $23 in early trading on November 5.