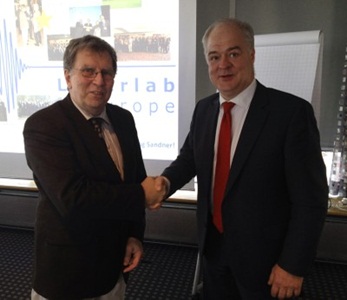 Claes-Göran Wahlström, head of atomic physics at Lund University in Sweden, has been elected as the new coordinator of the Laserlab-Europe consortium of 28 laser research institutions across 19 countries.

Wahlström succeeds Wolfgang Sandner from Berlin’s Max-Born-Institute. Sandner led the consortium and its evolution through several of the European Commission’s Framework Programmes, starting with the “Lasernet” thematic network launched via FP5 back in 2001.

Now in its third phase, the newly expanded group of laboratories will receive EC funding through 2015, with an emphasis on short pulses and high-intensity beams. In March, Sandner told optics.org that, thanks in part to the efforts of the Laserlab consortium, Europe appeared “to be the most powerful and successful region for laser research worldwide”.

The three main scientific areas to be pursued in the third phase of the project include providing sources of radiation and accelerated particles, developing new laser technologies for potential industrial applications, and improving existing platforms to support applications in life sciences and healthcare.

Sandner will himself move onto the Extreme Light Infrastructure (ELI) project that is taking shape in eastern Europe, and which has recently received €180 million in financial support via the European Regional Development Fund.

Wahlström, who is also the director of the Lund Laser Centre, is an expert in ultra-high intensity laser-matter interactions, and laser-driven particle acceleration in particular.

The official hand-over from Sandner to Wahlström took place during the Laserlab Europe general assembly meeting in Munich, Germany, on October 25. In his inauguration speech, Wahlström thanked Sandner for bringing together two separate laser communities - the “high-energy laser infrastructures” and “analytical laser facilities” – to form a single, powerful network.

Wahlström will be assisted in his new tasks by the Forschungsverbund Berlin e.V., the legal entity holding the Laserlab grant agreement with the EC, and by the Laserlab office in Berlin, both of whom will continue in their existing functions.