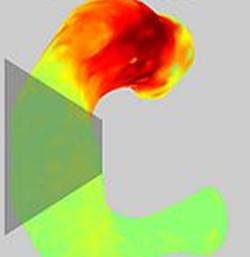 A team at Case Western Reserve University, Ohio, has used a technique based on optical coherence tomography (OCT) to visualize the stresses induced in embryonic hearts by the pumping of blood. The work was published in Biomedical Optics Express.

The method is based on Doppler OCT, a variant of the conventional technique which incorporates laser Doppler velocimetry to measure the frequency shift of the OCT signals returned by the sample.

Applied to an embryonic heart, this allows the local velocity of the blood flow to be measured without drastic modifications to the OCT system.

The team at Case Western used the Doppler OCT information to create 3D image sets with which to visualize the blood flow. This data can then yield information about the stresses being experienced by the developing heart, given the viscosity of the blood and the dimensions of the blood vessels.

"All previous attempts at shear-stress mapping have been two-dimensional, but the 3D geometry of the embryonic heart is changing hour by hour at these early stages, and the shape of the heart twists and turns as it develops," said team leader Andrew Rollins. "So a 2D projection doesn’t really provide a good approximation."

Shear stress is particularly significant, because the force exerted on the heart's innermost tissues, the endocardial cells, is known to influence healthy heart development. However, "no imaging tool has been available to measure shear stress on the endocardium volumetrically and dynamically," commented Rollins in the published paper.

In the new study, the technique allowed the team to directly measure the blood-flow-induced shear stress on the endocardium of early avian embryonic hearts over the course of a full heart cycle. The visualizations produced were effectively of 3D volumes in motion, or "4D Doppler OCT."

4D image data
The OCT system employed featured in-depth resolution of 8 microns and transverse resolution of 10 microns. The 4D Doppler OCT data were collected by imaging over multiple heartbeats at sequential slice locations and reassembled using retrospective gating, a method for obtaining data over multiple heartbeats and resynchronizing it after the fact to reconstruct 3D volumes. After reassembly a total of seventy volumes per heartbeat were acquired.

"We obtained 4D image data sets containing both structural and Doppler flow information," said Rollins. "These were used to create maps of shear stress on the endocardium at 14 time points during the cardiac cycle."

A further limitation at present is that areas where the blood flow is perpendicular to the OCT imaging beam, such as at the very center of the developing heart tube, are difficult to analyze as they returns little or no signal. A multi-beam method collecting image data from different orientations would address this issue.

Despite these hurdles, the team believes that with the principle now proven for avian embryos, methods to apply it to human hearts could follow. If so, Doppler OCT could ultimately play a part in deciding whether surgical means are needed to correct defects in developing hearts.

"We can use this technique to figure out just how function or dysfunction fits into normal heart development and the development of heart defects," said Rollins. "An understanding of normal and abnormal development is critical for preventing and treating these defects."