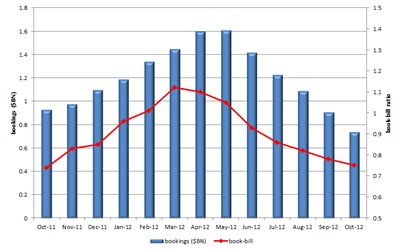 Bookings and book-to-bill: past 12 months

Demand for new capital equipment used by semiconductor manufacturers – a major application area for suppliers of lasers and other photonic devices – slipped further in October, according to the latest figures from the Semiconductor Equipment and Materials International (SEMI) trade association.

SEMI measured a book-to-bill ratio for North American equipment manufacturers of 0.75 for the latest month, continuing a downward trend that extends back to March. The book-to-bill ratio now stands at its lowest level since October 2011.

The result confirms views expressed by a number of the world’s leading laser vendors in earnings calls over the past few weeks. Jenoptik described the semiconductor equipment market as “increasingly difficult”, while Rofin-Sinar said that chip makers had become increasingly cautious.

“Semiconductor industry investments remain muted as the industry enters the fourth quarter,” said Denny McGuirk, the president and CEO of SEMI. “Investments in leading-edge technologies will continue to drive spending in the near-term, while a clearer 2013 outlook will emerge over the next couple of months as capex plans are announced.”

Although SEMI’s figures reflect a very subdued market for semiconductor equipment amid worries about the wider global economy, the level of bookings remains well above the extreme low seen during the aftermath of the 2008 global financial crisis.

Then, the book-to-bill ratio hit a low of 0.47 in January 2009, while equipment bookings registered an all-time low of $245.6 million two months later.

The "leading-edge" technologies mentioned by McGuirk include the emergence of extreme ultraviolet (EUV) lithography, which is benefiting vendors of components used in high-power carbon dioxide lasers, while Newport is beginning to see some demand for products to aid the early research and development stages of a future transition to manufacturing on 450 mm silicon wafers.

Further data released by the SEMI organization earlier this week showed that shipments of silicon wafers – another measure of the health of the semiconductor market – reached 2.39 million square inches in the third quarter of 2012. That represented a marginal decrease on the second quarter, but was up slightly compared with 2011.