But the diversifying semiconductor materials company says that its cash situation is “under control”. 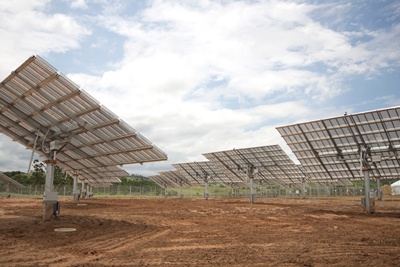 France-based Soitec, best known as a manufacturer of advanced semiconductor wafer materials, has revealed a net loss of more than €132 million for the first half of its fiscal year 2013.

The loss is the result of a major investment in concentrated photovoltaics (CPV) manufacturing infrastructure, combined with the semiconductor market moving back into a slump, with reduced demand for Soitec’s wafer products.

That combination has wiped out a large chunk of the company’s cash reserves, which has nearly halved in the past six months. It fell from €260 million on March 31 to just €131 million as of September 30.

However, the company insists that with the investment in scaling up operations at its CPV module production facilities in Freiburg, Germany, and San Diego, California, now largely accounted for, the cash "burn" is under control.

Soitec, which is also diversifying into the LED lighting market, now has a combined manufacturing capacity of 210 MW (peak) at its two production sites: 70 MW (peak) in Freiburg and 140 MW (peak) in San Diego. The latter site was built as part of a deal to make modules close to the company’s largest planned utility installations, and should eventually double in capacity.

However, at present the market for CPV is limited and funding across photovoltaics remains tight. According to market analysts at Navigant Consulting, the global market for CPV was approximately 62 MW in 2011, and may only grow very slightly from that total this year.

PV market: now following the sunshine
In the six-month period ending September 30, Soitec’s solar division did book €4.2 million in revenues and delivered 5 MW (peak) of CPV generating systems to a site in Italy.

But such was the required investment in the company’s CPV operation that its solar business division posted an operating loss of €40 million on those modest sales, while an additional €5 million relating to obsolete equipment in Freiburg was also written off.

Soitec will be hoping that Navigant’s “accelerated” forecast – which predicts that the market for CPV installations could approach 1.5 GW in 2014 – will turn out to be correct. However, the likelihood is that the rate of growth will be much slower than that, and the same firm’s more conservative outlook pegs the market at only 650 MW for the same year.

Rival analysts at IMS Research have suggested that there could be 1 GW of demand by 2016, while Greentech Media’s prediction for the same year is 1.4 GW. Lux Research’s forecast is for 31% compound annual growth through 2017.

One clear trend in favor of Soitec is the expected shift in deployments towards much sunnier locations – countries where CPV promises to be more cost-effective than conventional flat-plate photovoltaics.

In 2011, these so-called “emerging” PV markets accounted for less than a quarter of global PV deployments (according to Greentech Media’s figures). But with many European incentives for PV installations cut back or suspended since then, it will be the largely sunnier North American, Chinese, Indian, Middle Eastern and even African markets driving future growth.

South Africa deal
Soitec is itself enjoying some success in Africa, having recently signed a power purchase agreement (PPA) to construct a 44 MW (peak) CPV installation in South Africa. Soitec is hopeful that this project – which currently requires refinancing – could be completed during 2014, with the first systems in place by the middle of next year.

Gaetan Borgers, the executive VP of Soitec’s solar energy division, said of the planned South Africa project: “Approval of the power purchase agreement by the South African Ministry of Energy and its signature by national electricity supplier Eskom represent a major step forward in the expansion of our business in South Africa and generally worldwide.”

If and when this project is refinanced, it will represent one of the largest CPV projects in the world – and will provide a large boost to Soitec’s sales figures in the process. However, the company’s planned 350 MW-plus (peak) of installations near San Diego should soon eclipse that total.

At that point, Soitec’s revenues should be far less dependent on the cycles of the semiconductor industry, but in the short term the company is facing a real challenge in two difficult market segments.

In the first half of fiscal 2013, the semiconductor industry downturn saw sales from its electronics division slump by nearly a quarter year-on-year, to €126 million, as volume demand declined and wafer pricing came under pressure. Combined with the solar division’s investments, Soitec’s total operating loss was a worrying €70.2 million.

With the short-term level of demand in the semiconductor market looking very uncertain, Soitec has also instituted a cost-cutting program within its electronics division that is designed to reduce annual expenses by €20 million.

The company is currently in negotiations with trade unions to look at ways to make savings on payroll expenses at its Bernin, France, site, while other locations within the firm’s electronics segment are also currently implementing cost-cutting measures.