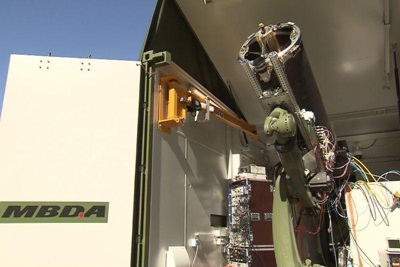 A laser weapon built by the German subsidiary of missile specialist MBDA Systems tracked and destroyed artillery shell targets in tests carried out last month – with the company saying that a militarized version could be ready in just three years.

On October 9 the 40 kW system, which is based on four 10 kW sources supplied by the German subsidiary of the industrial fiber laser vendor IPG Photonics, was fired at targets from a distance of 2 km and an altitude of 1 km.

MBDA Germany told optics.org that the test team used artillery shell “models”, towed in a wide variety of flight paths, to simulate enemy fire. “The campaign successfully demonstrated the complete deployment sequence with the high-energy laser demonstrator system,” said the company. “Detection with a radar/guidance system, target acquisition and tracking - as well as destruction of the target.

The latest laser demonstrator features a more compact and lighter optical system, which is now integrated within a transportable container, than the version tested last year.

MBDA Germany explained that while the fundamental optical system design has not changed from previous versions, the latest iteration includes smaller and lighter components. The focal length of the beam director telescope has also been optimized. One of the critical requirements of the optical tracking system in a laser weapon is the speed to cope with fast-moving targets like rockets and mortars.

Common optical elements
During the tests, the illumination and effect laser was pre-targeted using both radar and a MEOS II infrared system provided by the defense-focused EADS subsidiary Cassidian. A multi-stage control system, incorporating an in-house developed image processing system, was then used to lock the laser onto the target at close range.

Speaking at a conference dedicated to laser weapons development at SPIE’s recent European Security + Defence symposium in Edinburgh, MBDA said that its favored approach was to combine multiple fiber lasers in relatively simple fashion, using both a common output aperture and focusing element.

Alternative approaches include coherent or spectral beam combining, but these would require a more complex optical design and would likely prove difficult to achieve with off-the-shelf industrial laser sources.

In Edinburgh, MBDA also reported that it should be relatively straightforward to build an 80 kW system by combining eight of the 10 kW fiber lasers in a similar fashion.

Although the real requirement is for an even higher output power, MBDA thinks that this is no longer a distant prospect. “An output of 100 kW is necessary for a laser weapon system for military use,” the company said. “[and] based on MBDA Germany's demonstrator it is realistic to provide a high-energy laser weapon system for military use within 3-5 years.”

Peter Heilmeier, MBDA Germany’s director of market and business development, said in a statement: “Having already successfully boosted laser power to 40 kW in the first half of this year, we were able to take the next major step on the road toward a high-energy laser weapon system for close-in defense. In so doing, we have further extended our leading role in Europe in the area of laser applications for military use.”

Created from a merger of the major European missile manufacturers in 2001, parent company MBDA is owned by defense industry giants BAE Systems, EADS and Finmeccanica – and describes itself as the first “truly integrated” European defense company.

Last month saw its main shareholders BAE Systems and EADS (who together own 75% of the company) call off plans for a high-profile merger – though with defense spending cuts across the US and Europe, speculation remains that BAE Systems will now look to join forces with another major military contractor.