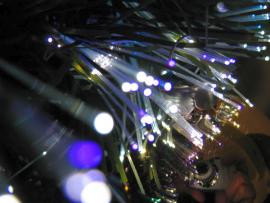 An initiative launched under the European Commission's FP7 research program intends to develop a new connector system for optical fibers, combating the problems caused by dust and dirt during field installations, and allowing the crucial joins to be made quickly and cleanly.

VECTOR, named for its goal of a "Versatile Easy installable Connector implementing new Technologies for accelerated fiber Optic network Roll-outs," is a partnership between European universities and the telecoms industry.

The ultimate goal is a system consisting of a high-performance connector concept and a fully automated installation tool that can be employed by operators with a minimum of training.

"The VECTOR project aims to develop a connectivity system that will have a multi-million-euro impact on both capital and operational expenditure of telecom fiber broadband networks, to speed up and harmonize the penetration of fibre-optics in Europe." commented Francis Berghmans of Belgium's B-PHOT photonics laboratory, speaking to Optics.org.

"The current penetration of fiber-based high speed telecoms network in the EU reaches only one percent, as opposed to 12 percent in Japan or 15 percent in South Korea. Europe will continue to lag behind other major world-economy players if no adequate measures are taken to increase our competitiveness."

VECTOR is coordinated by telecoms connections specialists TE Connectivity through its Belgium entity, Tyco Electronics Raychem. The project will also draw on contributions from DEMCON Advanced Mechatronics of the Netherlands, Celoplás of Portugal. Universiteit Gent, and Vrije Universiteit Brussel, home of B-PHOT. Telecom Italia and Telekom Deutschland are also on board. The project has received €3.1 million from FP7 funds.

Affordable ultrafast networks
Within VECTOR, B-PHOT is in charge of the design, fabrication and characterization of the micro-optical elements required to ensure ultra-precise connections between the optical fibers. Berghmans outlined some of the principles involved.

"The VECTOR Connectivity System comprises two components: the VECTOR Connector (VeC) and the VECTOR Installation Tool (VeIT)," he explained. "The installation tool will be an innovative hand-held device that will perform fiber termination at length and connectorization with VeCs in the field. It will be compatible with the wide majority of optical cables, pigtails and drop cable types."

Current installation typically requires the work of a skilled technician, but the intention is for the VeIT to perform all the necessary installation steps, including fiber stripping, cleaning, cleaving, and fixation, in an automated operator-independent manner. That could dramatically increase the installation yield in challenging locations and environments.

For its part, the VeC will include full backward compatibility with legacy connectors via a ferule-based converter, and will also feature what Berghmans described as unprecedented self-cleaning properties.

"The VeC will grant the highest grades of insertion and return losses, outperforming ferrule-based connectors that are aligned in a split sleeve adapter," he said. "The optical fiber prepared by the VeIT will be fixed by heat-shrinking technology into the VECTOR plug, and the bare fiber is aligned to the mating fiber using novel alignment structures."

The end result should be a connector system that guarantees factory-levels of performance during field installation, and a spur to the deployment of fast fiber-optic networks.

"Current connection technology makes the installation slow, unreliable and ultimately raises the cost per connection to hardly manageable levels," said Stéphane Berghmans, project coordinator at TE Connectivity, during the launch of VECTOR. "We intend to make fiber optic connections as easy as electrical wire connections, and to bring affordable ultrafast internet connections to all European households."