But the supplier of laser systems used in consumer electronics production sees opportunities in glass fabrication and HB-LED manufacturing. 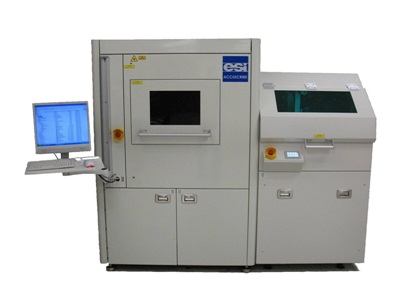 The US company, which is subject to large swings in demand from customers placing major orders, posted sales of $80.2 million for the period ending September 29, up from $59 million on a sequential basis thanks to large recent order shipments.

However, the “lumpy” nature of demand from consumer electronics manufacturers was evident in the figures for orders placed during the quarter, which at $35 million were down from $74.1 million sequentially. As a result, ESI expects to deliver revenues of only $40 million for the final quarter of the calendar year, and break-even bottom-line performance at best.

“We shipped most of the large microfabrication orders received in the June quarter,” stated Nick Konidaris, the company's CEO. “Our Singapore factory shipped a record number of units, enabling us to meet customer commitments and driving solid operating margins.”

As a result, ESI was able to bank a net profit of $5.2 million for the quarter just completed, swinging from a net loss of $0.9 million in the June quarter.

Despite the profit and a strong cash position, ESI is responding to the expected decline in sales by cutting costs. CFO Paul Oldham told an investor conference call that the company would take “aggressive temporary actions”, with cuts to contractors and temporary staff, reduced working hours over the Christmas holiday period and prioritization of research and development spending.

LED equipment: set for a rise in demand?
Konidaris said that an expansion of the company’s current customer base, to some degree responsible for the sharp quarterly swings in demand, was a priority. Key efforts to do that include ongoing design-in work with high-brightness LED manufacturers, which ESI hopes will result in new applications of its equipment for laser dicing of thin wafers and substrate materials.

Other areas earmarked for expansion include PCB micromachining and cutting of glass – the latter being seen by some as a lucrative new application for ultrafast lasers, and one in which recent acquisition EOLITE Systems has some expertise. 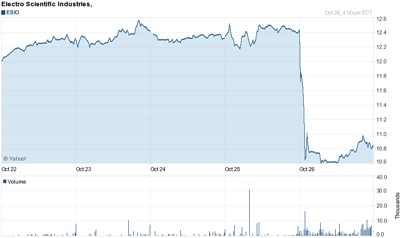 Of the current level of demand for HB-LED equipment, Konidaris said that the market remains in a state of overcapacity, although he does see some signs of an improvement next year. Other companies supplying LED manufacturing equipment to have reported recently include metal-organic chemical vapor deposition (MOCVD, the key equipment used to deposit light-emitting semiconductor layers) specialist Veeco Instruments, whose CEO John Peeler last week described the market as being “at trough levels” and reported weak orders.

Peeler provided some signs of hope though, saying in a Veeco statement: “We are cautious about short-term business conditions since there is still no clear sign that the economy is improving. However, the LED market is getting better – general lighting is growing, excess capacity is being absorbed, and customers are reporting more stable business conditions. An MOCVD order snap-back is inevitable as LEDs go from 5% of all lighting to over 30% over the next few years.”

Also last week, Veeco’s main rival in the MOCVD equipment market, Germany’s Aixtron, said that its orders had picked up by 15% sequentially, suggesting that the bottom of the market has now been passed.

Aixtron’s CEO Paul Hyland said “We are clearly getting closer to the start of the third major LED investment cycle, namely for LED general lighting.”

• Shares in ESI slumped by close to 13% on the Nasdaq stock exchange following the company's latest quarterly results announcement, reflecting the worse-than-expected outlook from the Portland-based firm.