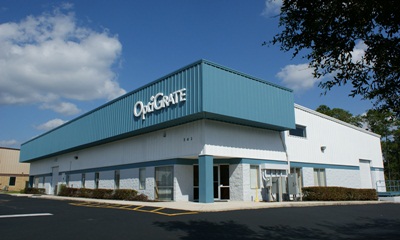 OptiGrate, the Florida-based maker of holographic optical elements that is run by a father-and-son team, has completed its move to an expanded manufacturing facility in Orlando.

The company says that fast-growing demand for products based on volume Bragg gratings (VBGs) had precipitated the move, with the new facility increasing its manufacturing and office space by 70%, and able to support further expansion.

Alexei Glebov, OptiGrate’s president and CEO, told optics.org that the need to expand was driven by high demand for VBG products in high-power laser diodes used for optical pumping, as well as for Raman sources, ultrashort pulse lasers for materials processing and medical applications.

According to the company, which self-financed the expansion, the new 10,000 square foot site was specifically designed for VBG manufacture. It is claimed to be the only vertically integrated VBG production plant in the world.

Engineering expertise includes a photothermo‐refractive glass production unit, a VBG holographic production unit, and a VBG laser application development laboratory. OptiGrate’s new offices are located in Oviedo, adjacent to the University of Central Florida - the second-largest university in the US and home to the renowned “CREOL” College of Optics and Photonics, from which OptiGrate was spun out.

“We are very pleased that our team succeeded in completing the move to the new facility with minimal interruptions,” added Alexei Glebov, CEO since 2008, and whose father Leon founded OptiGrate in 1999. “The new facility is already fully operational and we are shipping products manufactured at the new plant.”

Glebov says that the company has more than doubled its headcount over the past three years, and plans continued steady growth in the future. One of the emerging application areas for VBGs that the company is targeting is combining of very-high-power lasers for use in “directed energy” defense applications.

“VBG technologies have a number of unique advantages for both coherent and wavelength beam combining,” said the CEO, adding that the company partners on research in this area with father Leon’s team at CREOL.

“Combining of high-power lasers is still primarily in the research and development phase, and it’s surely challenging, but the potential of the technology is very exciting,” he told optics.org.

The CEO added that the recent expansion was completed with no external financing. “Over many years we sustained organic profitable growth, and we always reinvested our profits in expanding our technology base and production capabilities,” he said.