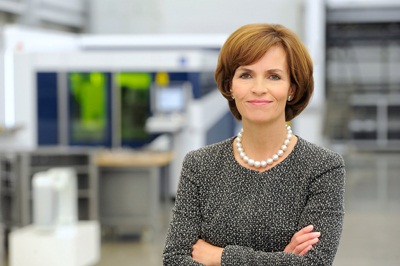 Trumpf has reported the highest annual sales in its corporate history, aided in no small way by a surge in demand for lasers and laser-based machine tools.

That corresponds to an increase of 15 percent, meaning that Trumpf beaten its pre-recession sales record of €2.14 billion, posted in fiscal 2007/8.

"Trumpf benefited from the fact that a lot of customers caught up on investments that had been postponed during the recession", said company president Nicola Leibinger-Kammüller. Thanks to flexible working arrangements with its employees, including sabbaticals taken during the financial crisis, Trumpf says it has been able to adjust quickly from recession to recovery – and believes that it has been able to gain market share as a result.

On the bottom line, the company posted pre-tax earnings of €221 million, up nearly 14% from €185 million last year. At €2.35 billion, orders are also higher than the €2.22 billion figure from the previous year. 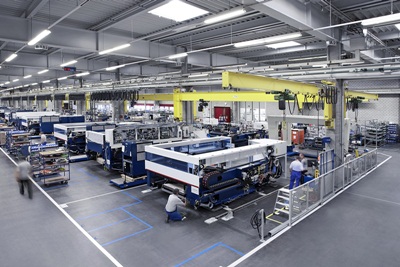 Laser sales up 24%
Sales of lasers were a significant part of the record-breaking year, with revenues up 24 percent to €636 million. Trumpf said that almost all laser technology product groups contributed to the increase.

That figure does not include sales of laser-based machine tools however, and Trumpf points out that no less than 66 percent of its total revenues, equivalent to €1.54 billion, comprised sales of laser-related products from its machine tools and laser technology divisions.

The company says that over the past fiscal year it has placed a special focus on the development of lasers that are expected to be used in extreme ultraviolet (EUV) lithography systems. Key light source suppliers Cymer and Gigaphoton are both developing laser-produced plasma (LPP) sources designed to keep the semiconductor industry on track with Moore’s law by shrinking device dimensions.

Although beset by difficulties and delays, the commercial introduction of scanners with EUV sources is set to begin next year, and the LPP sources produce EUV light by firing a high-power CO2 laser at droplets of tin.

Trumpf has developed a CO2 laser system specifically for EUV, and is expecting “considerable” sales as the technology is refined for commercial use by first memory chip manufacturers, followed by makers of logic chips.

Automotive expansion
In the more conventional laser applications, Trumpf says that the rapid pace of growth seen in the past year will weaken, with the exception of business in China. Nevertheless, the expansion of the automotive industry – exemplified by a recent deal to supply a large number of new disk lasers to BMW’s UK production facility - and the high demand for fiber lasers is still expected to generate robust sales.

"We are noticing that some customers are holding back on investments despite full order books, because the sovereign debt crisis in the Eurozone is making them nervous", observed Leibinger-Kammüller. "Despite this, we are continuing to aim for growth in the new fiscal year, since we are well-positioned in the markets that count."

In anticipation of strength in Asia, Trumpf has already doubled its production space in China. "Even though times are slightly tougher at the moment, there are good opportunities in many regional or technology-based markets – and we want to take advantage of them as best we can," added the Trumpf president.

The company says that it created more than 1000 new jobs over the past fiscal year, more than half of them in Germany, and now employs 9,555 people worldwide.

A significant chunk of those additional employees are working on development projects such as that for EUV lithography. The company says that its expenditure on research and development jumped by 22.4 percent year-on-year to €193 million in fiscal 2011/12 – equivalent to 8.3 percent of sales, which Trumpf claims to be almost double the industry average.

Some 1,352 Trumpf employees now work in research and development, with Leibinger-Kammüller stating: "It is only by making these major investments in the future that we can retain our technological lead over the long term."